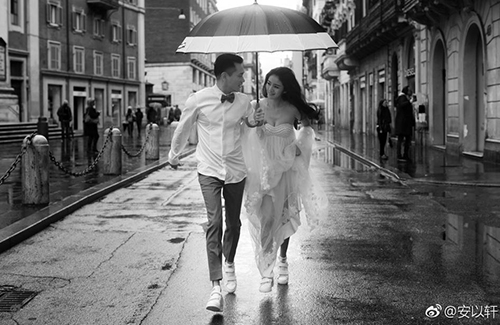 Taiwanese actress Ady An (安以軒) and Macau businessman Levo Chan (陳榮煉), have tied the knot! The marriage announcement was made by Ady herself, who shared the news on her social media yesterday.

The 36-year-old Autumn Concerto <下一站，幸福> actress wrote, “1230 days ago you used the Anywhere Door to break into my world, and I seriously used 810 days to get to know you. Who knew you could win me just like that? Alright then. [I’ll] eat with you [and] play with you until we’re old… never-aging Mr. Doraemon. In the future please take care of your Mrs. Chan!” Attached to Ady’s message are wedding photographs she took with Levo during their stays in Rome and Paris. Though Ady’s wedding announcement was a shock for some, many more fans and netizens congratulated her.

Levo, the chairman of a $2 billion HKD entertainment business in Macau, was born in Jinjiang, Fujian, China. He moved to Macau when he was in primary school. He became involved in Macau’s VIP business upon his graduation in 1990’s, kickstarting his business.

The Tak Chun Group chairman started dating Ady about two years ago. It was said that it took Levo over a year to get Ady’s attention. To not affect Ady’s career, the couple kept a low-profile, underground relationship.