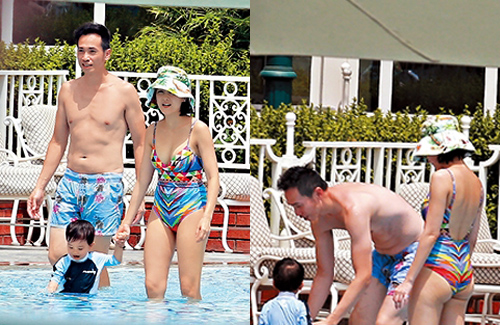 Nevertheless, recent photographs of Aimee with Moses and the two boys having family time at a pool in Disneyland gave fans a rare glimpse of her figure once again. Although Aimee was clad in a relatively modest swimsuit, this did not cover up her beautiful figure. It was evident that Aimee’s figure had recovered from both pregnancies and her cup size may even have increased.

Aimee was reportedly trying to spend as much as time as she could with her family before departing for Malaysia for her new project in September. As part of a comeback to the entertainment industry, Amy will be co-starring with Chapman To (杜汶澤) in a new film Let’s Eat! <開飯喇>.

As for Moses, he had earlier claimed to have lost weight for his role in the TVB drama, Fashion War <潮流教主> but he appeared to have a small belly bulge in the pool photos. Perhaps Moses put on a little weight while enjoying his blissful family life.

5 comments to Aimee Chan Flaunts Voluptuous Figure After Having Kids