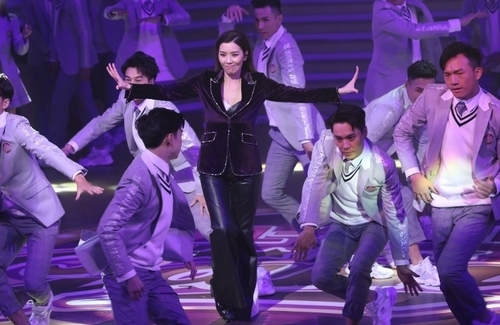 TVB Anniversary Galas are always full of entertaining and lively segments, and this year was no different. The 2018 TVB Anniversary Gala had three notable performances that made headlines – be it for blunders, humor, or fascinating acts.

Louisa was caught many times on camera dancing offbeat and stiffly while keeping a “chok” expression. After the show, many netizens left messages of complaints about her. Some of them said, “I don’t even know what you are doing,” while others wrote, “Your arms and legs are not coordinated.”

On the other hand, some netizens blamed Louisa’s poor performance on the lack of time to rehearse. They guessed she was busy filming a drama and thus did not have the time to rehearse the choreography. However, her position at the front of the stage should have been given to a more prepared artist.

The other person who stole the show in the dance segment was Mandy Wong (黃智雯). She appeared on stage wearing black sunglasses with sparklers surrounding her. The 35-year-old actress took control of the stage with her fascinating solo. Even when she joined her younger colleagues for the group dance, she still gave off a very domineering and charismatic appearance.

Likewise, Rebecca Zhu (朱晨麗) also gave a worthy performance in the martial arts segment. She performed cartwheels and jumped onto high platforms together with her Fist Fight <兄弟> cast mates, Tiffany, and Mat Yeung (楊明). In addition, she did a split with Rebecca and Mat carrying her. It was not a difficult feat due to her dancing background. Meanwhile, costar Philip Ng (伍允龍) also showcased his skills and used real Kung Fu to do a slow-motion performance.

Then a group of actors from TVB drama Life on the Line <跳躍生命線> reenacted a scene from the drama. The anniversary became like a program tour with the Fist Fight and Life on the Line stars. The most amusing segment, however, would have to be the bicep competition. Matthew Ho (何廣沛), Owen Cheung (張振朗), and Karl Ting (丁子朗) competed against each other for the biggest bicep during the gala. One by one they took off their blazers and ripped off the sleeves of their dress shirts to get their flexed biceps measured. Owen, who lost at 13 inches, expressed, “I knew I wasn’t going to win.”

Just half an inch bigger in circumference than Owen, Karl jokingly said, “I am just young, I’m still going through puberty.”

Matthew was crowned the winner at 14 inches. He previously disclosed he trained his body to film Life on the Line. Commenting on the results, he said, “I usually work out!” 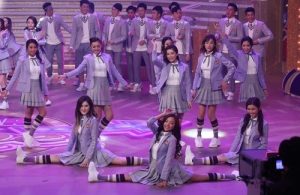 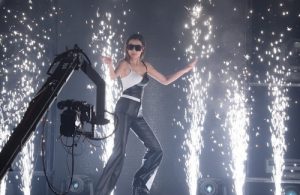 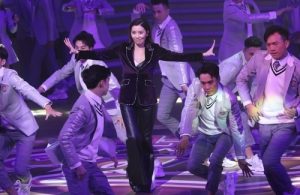 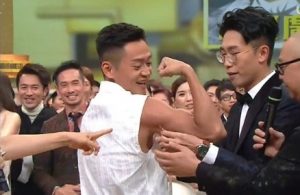 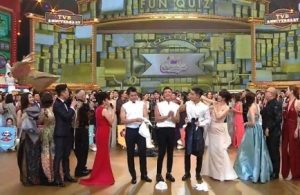 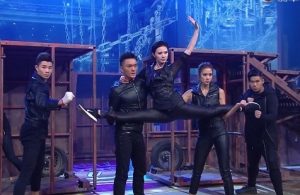 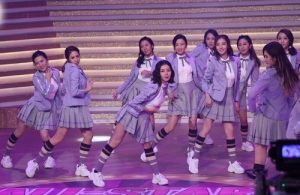