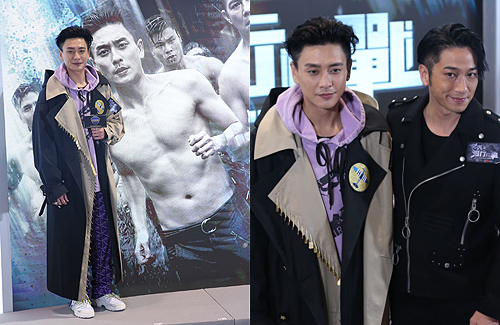 Bosco Wong (黃宗澤) and Ron Ng (吳卓羲) promoted their new web drama, Flying Tiger <飛虎之潛行極戰>, at FILMART 2018 today. While chatting with the press, Bosco’s unique fashion ensemble today attracted notice. The 37-year-old actor admitted that he has many skirts in his home closet.

Bosco and Ron will be singing the sub theme song for the new Shaw Brothers’ web drama, Flying Tiger.  It has been over ten years since the pair last collaborated together on a song. “Originally, Michael Miu (苗僑偉) was invited to sing, but he refused. If Michael agreed, then Raymond Lam (林峯) and MC Jin‘s song would not be the theme song.”

At the press conference, a Flying Tiger poster featured Bosco and other co-stars shirtless. Asked if he felt embarrassed, Bosco said, “No, it’s very common for actors to strip now. Actresses, on the other hand, don’t have to do it.” Standing next to Bosco, Venus Wong (王敏奕) teased that he did not eat sweet nor oily foods during filming in order to look fit. Bosco replied, “You showed your muscles wearing a tank top too.”

Since Ron Ng’s character joined the Flying Tigers unit later in the drama, he did not have training scenes requiring him to go topless.

Actually, Bosco clothed may attract more attention than going topless, especially with his fashion forward sense. Wearing a purple hooded sweater with a black and tan colored trench coat, the ensemble is very unusual. Bosco said, “I’m brave to try anything! Everyone is wearing a suit and tie, but my outfit has something for others to talk about. I have many skirts at home and will even buy women’s coats. But I have to find a fitting occasion to wear them.”