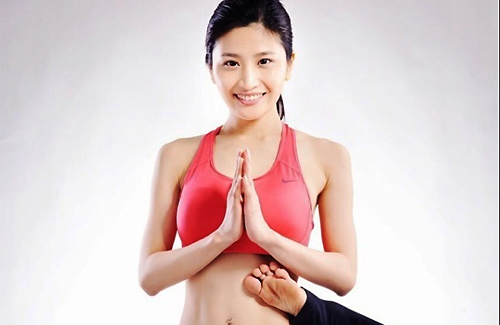 After a 30-minute public restroom tryst with her lover, Coffee Lam (林芊妤) was fired by TVB. However, things turned out for the better as Coffee began receiving numerous job offers. With greater income, Coffee moved out from her family’s public housing into a regular apartment.

Although Coffee has been a TVB artiste for several years, she continued to portray cameo roles and only received a monthly salary of $4000 HKD. Suddenly featured in top news headlines on a daily basis after the restroom scandal, Coffee’s exposure rate shot up. Utilizing her yoga instruction certification, Coffee has been teaching yoga and charges $1000 HKD per lesson. Although she does not have an agent, Coffee finds it easier to deal with clients directly and often makes appearances at mainland China events. It is estimated that Coffee now earns $50,000 HKD monthly salary from teaching yoga and other side jobs.

Not angry at TVB for firing her, Coffee even thanked management executive Virginia Lok (樂易玲) for letting her go and giving her an opportunity to become an independent artiste.

Despite her controversial restroom behavior, Coffee is a filial daughter. Coffee remains frugal even after her increased income from yoga lessons and beauty sponsors. She still takes the subway when going out, and when spotted shopping for her new apartment, she turned her head away from expensive items, opting for lower-priced alternatives instead.

With the paparazzi often trailing her since the scandal, Coffee found it more convenient to move out of her family’s apartment. She did not want to affect her family with the media’s intrusive habits. On moving day, Coffee was seen hauling all her luggage up the stairs all by herself.

“This is the first time I’m renting my own apartment. I hope everything goes well. I found a very good path for myself, which is to become a yoga instructor. I will also make occasional appearances at public and events, ribbon-cutting ceremonies, and film ads,” Coffee said.