Coffee Lam Receives Jobs After Being Fired by TVB 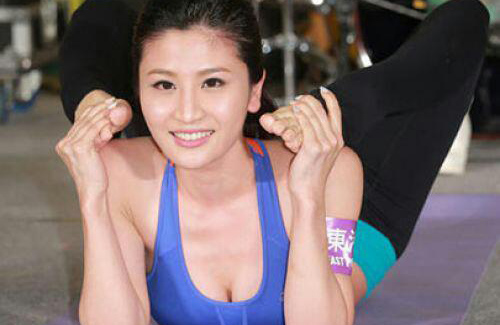 Earlier this week, Coffee Lam (林芊妤) received her very first job after being fired from TVB earlier this month. The company terminated the 24-year old actress’s management contract after her 30-minute public restroom scandal with Will Lam (林知譽) surfaced. An advanced yoga enthusiast, Coffee taught yoga at a mall function before the crowd.

Appearing to be in good spirits, Coffee Lam arrived at the function in full yoga gear. She taught the audience a series of exercises by demonstrating each move. Unafraid to arouse talk about the restroom scandal, Coffee even joked that she is “out for a gathering with everyone.”

When asked if the scandal has created more jobs and opportunities for her, Coffee expressed, “It’s a blessing in midst of all the trouble. Although the incident cost my entire image, at least a lot more people now know who I am.” However, she was quick to emphasize once again that she is not using the scandal as a publicity stunt.

Coffee admitted her salary has increased and she is now paid more for event appearances. But despite the pros, she still highly regrets the restroom incident. “I’ll have to face it since it already happened. At first, I was scared to turn to the crowd. I haven’t seen everyone for a long while.” Coffee added that Will Lam sent her a text message because he was worried about her situation.