The ice has been broken between Kris Wu (吳亦凡) and Edison Chen (陳冠希), who threw shade at the Rap of China <中國新說唱> star for being a bad rapper. 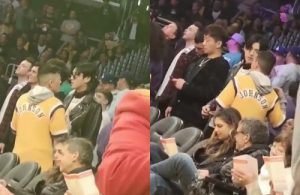 Edison and the Rap of China cast had a history. For as long as the show has been on air, Edison never regarded the show highly. Earlier last year, Edison took to Instagram to call out all the Rap of China cast as “bi**hes”. When Kris started to use his coined word “skr” repeatedly on the show, Edison made another post that seemed to be directed at the young singer-actor, exclaiming that he didn’t understand the essence and spirit of hip hop.

But now, the ice between the two rappers may have broken.

On March 9th, both Edison and Kris were spotted in Los Angeles, watching an NBA game featuring the Los Angeles Lakers vs. the Boston Celtics. Both stars are huge fans of the Lakers and sat near each other. According to eye witnesses, Edison approached Kris first and the two had a long chat. In the photos and videos shared online, both Edison and Kris were seen engaged in a lively conversation.