In the last few months of her pregnancy and leading up to her son’s birth, Cecilia was living in Taipei with Nicky. She was reportedly living in a luxury house, one of the four units purchased by Nicky two years ago for NT$190 million.

But things aren’t doing as great as they are appearing. 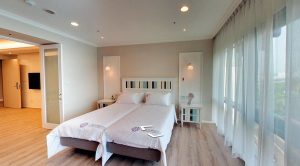 Rumors are saying that Cecilia has developed postpartum depression and is having disagreements with her mother-in-law. Their sour relationship has actually been going on for years. Prior to her grandson’s birth, Nicky’s mother would pester Cecilia about getting pregnant. Stressed and under immense pressure, Cecilia reportedly flew back to Beijing crying for her family.

Nicky is also under fire by Chinese netizens for his poor treatment on Cecilia. According to reports, Cecilia is currently staying in the VIP presidential suite of a postpartum center, which costs NT$12,000 a night. Calling Nicky as “cheap,” netizens pointed out that Chinese actress Gao Yuanyuan (高圓圓), who also recently welcomed a child with Taiwanese actor Mark Chao (趙又廷), is staying in an expensive postpartum suite in Beijing for NT$90,000 a night.