Despite the hefty sum she owes authorities, the 37-year-old actress should not have any problems paying back the money within the allotted deadline. Last year, Fan Bingbing was the top-earning Chinese artiste with an income of 240 million yuan. Dominating Forbes’ list of most influential Chinese artistes for the past ten years, Fan Bingbing is also a fashion icon and favorite among advertisers. Profiting heavily from her investments and owning several overseas properties, Fan Bingbing’s total worth is estimated to be at least 7 billion yuan.

The tip remained unconfirmed, but may be unlikely as Fan Bingbing was highly apologetic in her public statement released today. She admitted to tax evasion tactics and said she is ready to face the authorities’ punitive measures.

Released on October 3, Fan Bingbing’s statement is as follows:

“Recently, I have experienced pain and suffering that I have never experienced before. I have carried out profound reflections. I am deeply ashamed and guilty about what I have done. I sincerely apologize to everyone!

“For a long time, I did not distinguish between national, social, and personal interests. On the set of Air Strike <大轟炸>, I used ‘split contracts’ for tax evasion purposes, an act which I am deeply ashamed of. While coordinating with the tax authorities’ inspections of my company and myself, I have deeply reflected: as a public figure, I should abide by the law, and play a leading role in society and industry. I  should not lose myself in the face of financial interests, relax the rules, and violate the law. Here, I sincerely apologize to society, the friends who care about me, the public, and to the national tax authorities.

“From an early age, I have liked performing arts. Coupled with the flourishing of the film and television industries, the support of many seniors and love of the audience, along with my continuous efforts, I made a little achievement in performing arts. As an artiste, I am always proud of being able to showcase my culture on the world stage, and I spare no effort for it. It can be said that each of my achievements cannot be separated from the support of the state and the people. Without the good policies of the party and the state, and without the love of the people, there would be no Fan Bingbing.

“Today, I am deeply unsettled by my own wrongdoings! I disappointed my country’s cultivation towards me, society’s trust, and fans’ love for me! Here, I sincerely apologize to everyone! Please forgive me!

“I believe that after this rectification, I will make sure to closely follow the rules and be responsible.  While giving good productions to everyone, I must also supervise my company management to make sure it is law-abiding, honest, and trustworthy, striving to make it a good company with rich cultural connotations and spread positive energy to the entire society!

“Once again, I sincerely apologize to society, the fans who have always supported me, the friends and family who care for me!” 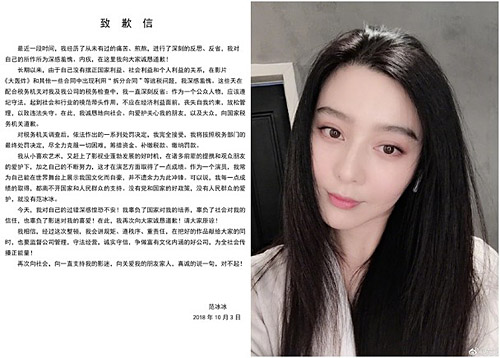 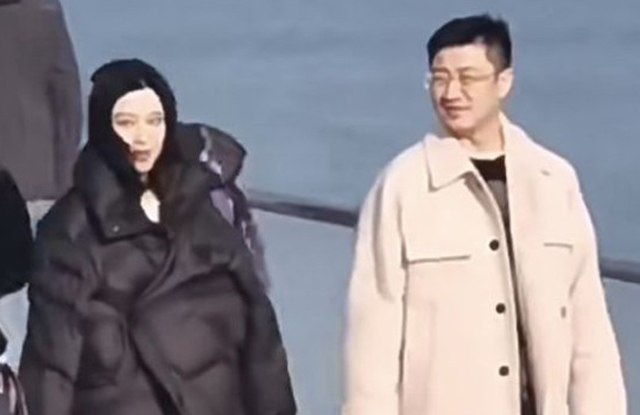