Married for only 14 months, Gillian Chung (鍾欣潼) and Michael Lai (賴弘國) announced their divorce today.  Often separated long distance because of their careers, their marriage was rife with many problems, pushing Gillian to finally ask for a divorce in March. The biggest problem, however, is that Michael feels Gillian doesn’t love him enough.

The 39-year-old star confirmed her divorce and stated, “Both of us do not have any grievances.” Her management agency, Emperor Entertainment Group, alluded that there were lifestyle differences behind their separation.

After meeting Michael in 2017, Gillian fell for the Taiwanese gynecologist quickly although he was divorced from a previous marriage. The following year, the couple held lavish weddings in Los Angeles and Hong Kong, and later appeared in Chinese reality show Parenting Class <爸媽學前班>. On the show, Gillian admitted that while she liked Michael’s attentive and loving nature, it was really loneliness that brought them together. 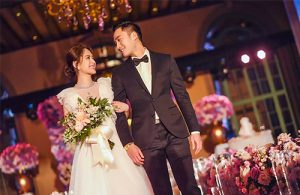 Being married to a big celebrity comes with pressure, but Michael’s biggest complaint is that Gillian does not truly love him. He revealed that immediately after their wedding in 2018, Gillian already regretted getting married. But the couple decided to work out their problems until their relationship again cooled off after the filming of Parenting Class.

In February while Gillian was filming a web drama in Malaysia, Michael visited her on set and apparently left on a good note. The couple knew that because of the coronavirus pandemic, they would be separated long distance for a lengthy time. When he received Gillian’s request for divorce, Michael was shocked that their marriage has come to an end, but he nevertheless agreed and signed separation papers on March 1.

Recalling his bittersweet journey, Michael said Gillian had doubted their marriage from the beginning. He wrote in a lengthy social media post, “When I think back to 2018 after our wedding in Los Angeles, you suddenly turned cold. I asked you why, and you told me that you regretted [our marriage]. You didn’t love me very much, and felt you were not suitable for marriage. We discussed for a long time and decided to give our relationship another chance.

“In March of this year, you called me and said: ‘I’m sorry, I thought I would fall in love with you slowly after marriage, but you really couldn’t do it. When I received your signed separation agreement, my feelings went from sadness to anger to loss, and finally to acceptance of reality. I think life is like this. Although I still can’t believe it, but thank you for telling me your true feelings so that we can walk towards our separate future.”

Despite this, Michael does not regret getting married with Gillian, “I would still have proposed to you and gotten married.”