Gillian Chung (鍾欣潼) made headlines when she announced her divorce from Taiwanese gynecologist Michael Lai (賴弘國) in May – just 14 months after tying the knot. According to reports, Gillian and Michael secretly signed a one-year separation agreement that would result in a finalized divorce next February 28. Gillian adamantly said she has not considered getting back together with her soon-to-be ex-husband during the separation period. Moreover, the star lost any desire to date in the near future or remarry with her short-lived marriage.

In an interview, the 39-year-old asserted, “I don’t think I would remarry. Marrying once is enough! I don’t think I’m suited for marriage either, so it’s not necessary.”

Going through a divorce that has graced the front page of tabloids inevitably altered Gillian’s perspective on marriage and love. When the media exposed the end of her relationship, she was swept up in a flood of speculations ranging from her lack of love for her husband to her hatred for his partying lifestyle. Things turned messier when Michael penned a lengthy post on how much he loved Gillian and the exorbitant sum of money he spent on their lavish wedding. Despite gossip that their relationship ended on bad terms, the singer-actress shared that she still kept in contact with Michael during their separation. “Being friends would be the most comfortable. Besides, I haven’t thought about dating,” she expressed.

Despite Gillian’s lack of desire to find romance again, her mother is eager for grandchildren. Although Gillian wanted children and even froze three eggs in the past, the divorce halted all baby plans. Gillian said, “I would have a baby with someone whom I love very much, but I don’t have someone like that yet.”

As such, her mother encouraged her to freeze more eggs, but Gillian is reluctant. She expressed, “Getting injections every other day is hard. On top of that, I’m the type to gain weight easily, so having a child will have to depend on fate.”

As for the rumors that Michael sold Gillian’s babies – luxurious bags and watches – during the separation, she replied, “I won’t talk about divorce matters anymore. I feel content right now and will focus on work.”

To Have Good Fortune For The Next 10 Years 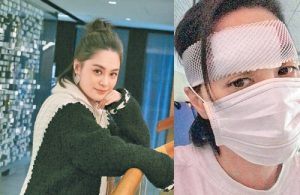 Choosing to immerse herself in work, Gillian shared that a feng shui master told her that she would have good fortune for the next 10 years, and the serious head injury she experienced in September will not affect her luck. It is believed that she will find further success in mainland China, as she garnered praises for her acting performance in the Chinese reality show Everybody Stand By <演員請就位>. Gillian admitted the recognition enhanced her confidence.