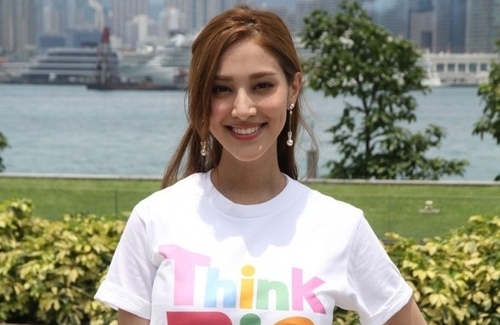 On April 22nd, Grace Chan (陳凱琳) attended TVB’s children’s event Think Big World <Think Big 天地> as an ambassador and host. Thankful for the company’s lighthearted work arrangement, 27-year-old Grace said being around children makes her happy. “Seeing them put their heart and energy into jumping during the games, I think their athletic spirit is so amazing. I also want to bring my son. Even though my friends told me it’s too early, I’m training him to walk right now because I really want to take him to the park.”

Likewise, her husband, 49-year-old Kevin Cheng (鄭嘉穎), is also anticipating the day their two-months-old son can play tennis. Grace shared, “Kevin was watching tennis one day and he asked me at how many months old can the baby play tennis with him. I told him the baby won’t even know how to walk at one, wait until he is older first.”

In addition to the couple’s eagerness for their son to walk and play sports, they’re waiting to wean their newborn from nighttime feedings. “My friend told me all I need to do is tell him he needs to quit night milk, so I said it’ll be great if it was really that easy,” Grace said laughing. “Of course, when I got home I told him that, and he just looked back at me with big round eyes. He definitely did not know what I was saying. But luckily, Kevin helps feed him, especially since Kevin’s a late sleeper, so he helps feed the 3 a.m. round before going to bed.”

However, sometimes Kevin forgets to remove the baby handkerchief from his shoulder after feeding Rafael and will walk around like that. Such forgetful moments also happen to Grace, who stepped out to buy something to eat the other day and found a baby handkerchief in her pocket. Smiling, Grace revealed, “That’s when it finally hit me that I’m a mother now.”

The new mother also expressed she has a better grasp of taking care of her son than she did before. “I can tell what his cries mean now – whether he’s crying because his diaper needs to be changed or because he’s hungry.”

Busy caring for her child, the actress said she will focus on being a “professional mother” in the meantime and will not consider filming dramas at the moment. Thus, Kevin will shoulder the responsibility of earning money for baby formula. “He often has to fly for work, so I try my best to Facetime him so he can see our son. I told him it’s ok as long as it’s in moderation,” Grace said.