After marrying Kevin Cheng (鄭嘉穎) and becoming a mother of two boys, Grace Chan (陳凱琳) has taken a hiatus from her acting career but remains passionate about working. In the beginning of the year, Grace launched her own beauty brand, Snow Queen, by collaborating with social media influencer Snow.  The good friends work well together and when they are not brainstorming ideas for new products, they often trade beauty tips and share their life experiences together.

In a recently uploaded a video, Grace and Snow are seen playing rapid fire response at the Four Seasons presidential suite. Grace shared that she wishes to have experienced more of life when she was younger, bringing up that she had only gone clubbing two times in her life. For Snow, her biggest fear as she gets older is the fear of dying. 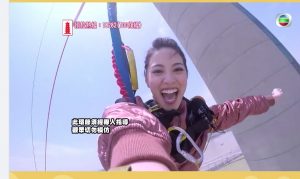 On the topic of dangerous activities Grace was involved in, she cites the heart-stopping bungee jump with Sisley Choi (蔡思貝) for the 2016 Community Chest Charity Show <萬眾同心公益金>. It was a very scary experience where Grace felt like she had jumped off a building. “I don’t have the courage to jump again–I didn’t cry but I was very scared. I sat on the floor agonizing over what I had done.” She joked that the donors were very twisted, “Why do we have to jump before they donate?” Although it was a very scary ordeal for Grace, she and Sisley successfully raised $500,000 Hong Kong dollars.

Though winning Miss Hong Kong 2013 brought fame and recognition, Grace was upset that the media had unearthed all her personal information and violated her privacy during the pageant. “The media kept disclosing information about my family and how many siblings I had. I’m the one competing it the pageant, not my dad or my mom. So I was very unhappy that they kept bothering my family for interviews.”

Although Grace is considered to be one of the most beautiful Miss Hong Kong winners in recent years, she also has areas of insecurity.  Grace shared the four facial features that she is insecure about, “My chin and neck are too long; my teeth could be straighter; and my nails look like a 3-year-old!”

Meeting Grace Chan Made Kevin Cheng Want to Get Married