Tavia Yeung and Him Law Secretly Married in England! 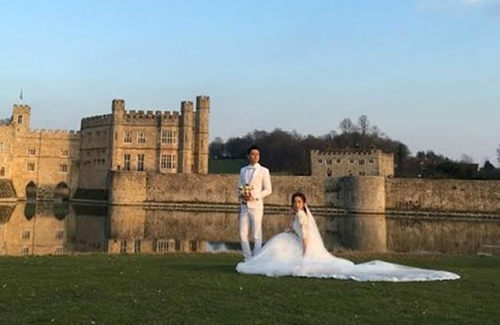 Tavia Yeung (楊怡) and Him Law (羅仲謙) are officially married! On Saturday, a photo of Tavia and Him posing in front of England’s Leeds Castle was posted online. It was taken on March 22, the day Him and Tavia officially registered their marriage. The couple have been dating for four years.

In the photo, Tavia wore a long bridal gown with a low-V cut. Him has taken the role of Prince Charming himself, dressed all in white and holding a bouquet of flowers. Witnesses to the marriage was Tavia’s mother and Him’s father.

After walking down the aisle and exchanging their vows, Tavia held onto both Him and her mother as they walked out of the castle. Him stood straight as he walked, looking visibly nervous.

The wedding was held in absolute secret. And though neither Tavia nor Him have made official announcements, their friends rushed to social media to congratulate the newlyweds.

Leed’s Castle is located in Kent, England. On site since 1119 and with nearly 900 years of history, it is one of England’s oldest castles. It is a popular destination for weddings, which can cost up to 15,000 pounds.

32 comments to Tavia Yeung and Him Law Secretly Married in England!