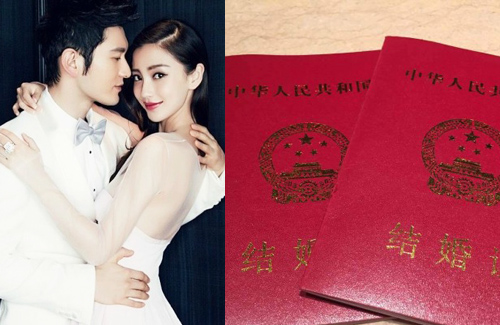 After dating for five years, Huang Xiaoming (黃曉明) and Angelababy (楊穎) got married on May 27. The couple registered their marriage in Xiaoming’s hometown in Qingdao. Sharing the joyful news with fans, Xiaoming posted a photo of their marriage certificate on Sina Weibo.

In 2009, Xiaoming and Angelababy met through a mutual friend at a karaoke bar. Attracted by Angelababy’s playful personality, Xiaoming eventually dropped his guarded stance over their relationship and began to speak openly about their love in interviews. Despite their 11-year-age gap, the couple gets along very well. Xiaoming is often full of romantic surprises, lavishing Angelababy with a Lamborghini for her 25th birthday last year and a rose-studded party at a hotel for Angelababy’s 26th birthday this year. For the past year, the couple has been bombarded with questions about their wedding date. Hoping to handle their marriage privately, the couple continued to dodge the issue even after they were spotted taking wedding photos in France last week. After registering their marriage in Qingdao today, Xiaoming finally announced that they had tied the knot.

Xiaoming’s godmother Tiffany Chan (陳嵐) revealed that she had already known about the couple’s marriage plans in advance, but was obliged to keep the secret. Tiffany said, “I’m very happy for them. I believe they can grow old and find happiness together.”

With a combined earnings of $150 million HKD last year, Xiaoming and Angelababy are a power couple with extensive social networks in China, Taiwan, and Hong Kong. They will reportedly invite 3000 friends and family to their wedding banquet in Shanghai in October.