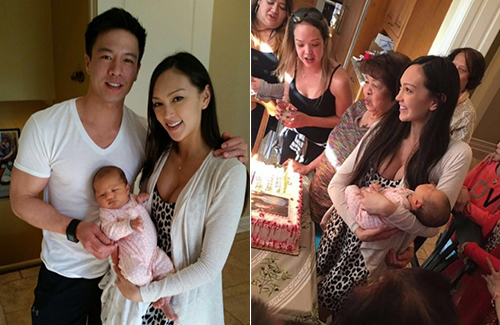 The birthday party was small and intimate, attended by only close family and friends. Jessica shared that she celebrated the birthday with her aunt Elvie, who also has an April birthday. Jessica said, “We held a surprise party for my Auntie, who is 86 years old. I’m so happy that I got to celebrate my birthday with not only my family, but also with Andy and Tessa.”

Jessica and her husband, actor Andy On (安志杰), welcomed their baby daughter Tessa Nicole in March 2016. The superstar model said she breastfeeds her daughter every two hours. “It’s tiring, but I enjoy it so much,” she said.

In the family photos of Jessica’s party that appeared online, Jessica wore a leopard-print dress that showed her cleavage. Netizens said they were shocked to see how much Jessica’s breasts have grown after having Tessa, expressing, “Her breasts are now as big as her daughter’s head!”

Jessica revealed that she plans to return to Hong Kong for work at the end of May, and will be working hard to lose her post-baby weight in the meantime.