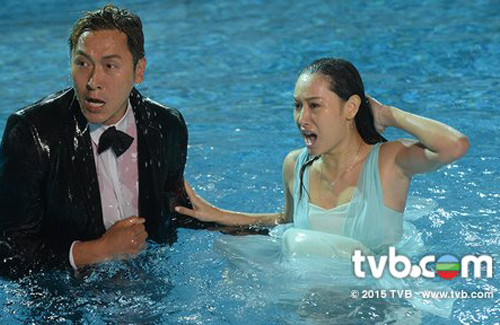 Joe Ma (馬德鐘) and Kate Tsui’s (徐子珊) drama Smooth Talker <以和為貴> is raking in good viewership ratings in Hong Kong. The witty comedy about mediators debuted to an average of 25 points — at approximately 1.6 million live television viewers — in its first week of broadcast, and is the highest-rated drama of the week. Joyce Koi (蓋鳴暉) and Moses Chan’s (陳豪) Romantic Repertoire <水髮胭脂>, which also premiered on the same day as Smooth Talker, debuted to 24 points.

At a charity event, Joe shared that he was actually very nervous while waiting for last week’s viewership ratings to be revealed. “I invited my friends over so we could watch the sixth episode together. I found out about last week’s ratings yesterday. I’m quite satisfied! I hope it’ll do even better and reach the thirties.”

Joe revealed that there will be many promotional events lined up for Smooth Talker in the coming weeks and he will be sure to attend all of them. Joe’s friends are also helping promote the series online.

“I’m very happy to hear about the positive responses coming from the audience,” said Joe. “A lot of them liked my special [comedic] performance. It’s rather refreshing for them. We don’t want to see a Tiger Cubs <飛虎>, Tiger Cubs 2, and Tiger Cubs 3 all the time.”

Though Joe often films melodramas and crime dramas, he is not unfamiliar with the comedy scene. He shared that a lot of the bickering dialogue that takes place between his character and Kate Tsui’s is actually written by them.

Asked if Smooth Talker opened doors for Joe to star in more comedies, he said, “Before I filmed this, I already got offers to star in comedies. Filming comedies are comfortable. You get a happy filming experience and the atmosphere is great. On the other hand, filming Tiger Cubs was really draining!”