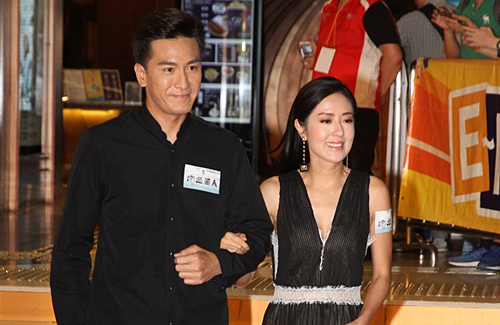 Attending a promotional event for the premiere of his drama Big White Duel <白色強人>, Kenneth Ma (馬國明) shared his thoughts on the new series, and why Big White Duel is different than TVB’s previous medical drama.

“It’s not your typical medical-themed series. Besides centering around doctors and saving lives, it talks about the actual medical procedures. It’ll also involve a bit of politics,” the 45-year-old actor said.

Asked whether he has high hopes regarding the drama’s viewership, Kenneth said, “It’s hard to say because this is not your typical housewife-drama. Housewives may not find politics interesting, but I think TVB should continue filming a variety of genres. It’s not always about targeting a specific audience. I’m happy that we get to showcase a different type of series for viewers.”

Having already finished filming his part for The Exorcist’s Meter 2.0 <降魔的2.0>, Kenneth wishes co-worker Hubert Wu (胡鴻鈞) a speedy recovery after the actor sustained a head injury on the filming set. Due to his hospitalization, Hubert was unable to complete several scenes with Kenneth and had to use a stunt double in the meantime. With most of the production almost complete, Kenneth said Hubert will just need to go back and film the significant scenes after his recovery.

With his girlfriend Jacqueline Wong‘s (黃心穎) cheating scandal exposed in April, Kenneth has been bombarded with media questions since then. Hoping this will be over soon, Kenneth has been fully concentrating on his work. Stressing that he is fine and that he doesn’t need to take a break, Kenneth hopes everyone can show some mercy while he is busy with work.