Kenny Kwan’s Stalker Harassed Him for Half a Year 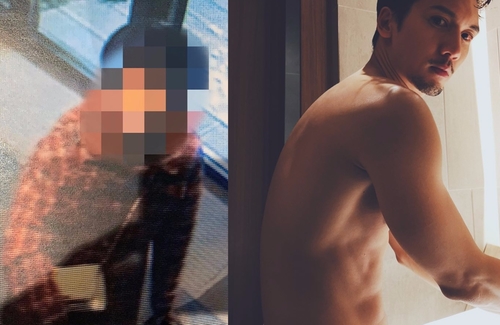 Many fans will act irrationally in order to get closer to their idols – be it skipping school to see them in person, spending exorbitant amounts of money to give them gifts, or even stalking them. Artist Kenny Kwan (關智斌), who has been oozing with masculine charm as of late, revealed a female fan has been harassing him for nearly half a year already. Kenny, who often travels back and forth between Mainland and Hong Kong for work, expressed the stalker went too far by looking for him at his luxury apartment in Clear Water Bay.

On May 2nd, the star shared a CCTV screenshot of his stalker – a lady wearing red – on Instagram. He wrote, “On Tuesday evening when I was about to rest at around 11 p.m., I was suddenly contacted by the security guard. A Mandarin-speaking lady in red appeared at the door of my building with a suitcase. She used the security phone to try to contact me and my neighbors with the intention of breaking into the lobby’s elevator. Fortunately, the security guards in the estate prevented that from happening. The thing is, this is not the first time…”

Kenny is Afraid She’d Hurt Him

It turns out she has been harassing him for nearly half a year. Aside from going to his place of residence, she also frequently comments on his social media platforms, using an inexplicable imagination and threatening tone. However, the strangest thing is she has a lot of Kenny’s personal information including his address and phone number. “She’s forced me to change a lot of my personal information and my phone number at the beginning of the year,” he states.

Kenny hopes his stalker will consciously curb her behavior after reading his post. “I want to solemnly tell you that your frightening behavior has deeply troubled me,” he directed his message at her. “I started to worry about my personal safety and even worried that you would successfully get into my residence one day. Or that you’d be hiding in a corner when I’m working in a public area, or that you’d hurt me. These troubles have begun to affect my daily work and emotional well-being.”

He continued, “I want to tell you that I am just an ordinary person in real life. Through my own hard work and career, I seek to find my own life and expand my life experiences. I believe there must be more meaningful things worthy of our attention and efforts in life. I hope that you can also focus more time on your family and work. I believe that you will have a wonderful life.”

He Gives Her a Final Warning

Kenny promised, “I will retain all rights to protect my personal safety. If something happens again, I will definitely get the police involved.”

In the meantime, the security guards already saved the footage of the woman, and Kenny has also submitted screenshots of the stalker’s messages to the company for reporting. Kenny said he was grateful for the responsible security guards and was apologetic to his neighbors.