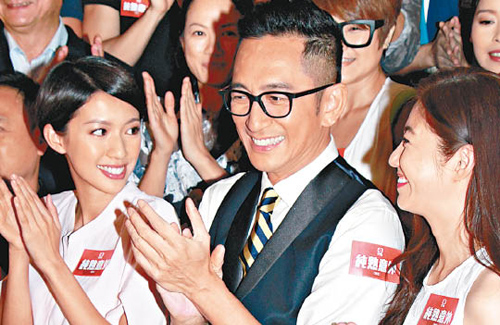 Attending the blessing ceremony for upcoming drama Purely an Accident <純熟意外>, Lawrence Ng (吳啟華) revealed that his busy filming schedule for the next few months would leaving very little time for his 6-year-old daughter.

Since his daughter currently resides in China, Lawrence is missing out on precious father-daughter time. Hoping to wrap up filming before September, the single father plans to spend some time to help his daughter prepare for her first day at school.

Bonding time is most important during childhood, but due to Lawrence’s career, he has no choice but to make some sacrifices. Worried about his relationship with his daughter, he lamented, “It can’t be helped. A lot of parents have to work! She currently lives with her grandmother over there and has a lot of relatives. It’s a lot livelier there. If she were to come here, I would still have to work. It would be better to stay in Changchun rather than in Hong Kong where she would have to spend most of the time with the babysitter.”

Joyce Tang (滕麗名), Selena Li (李施嬅), Yoyo Chen (陳自瑤), and Sisley Choi (蔡思貝) were also present during the blessing ceremony. In contrast to her usual outgoing self, Sisley became quite timid and shy around Lawrence during their first collaboration.

In the series, Lawrence and Sisley will have a rather ambiguous romantic storyline, but it is currently unknown whether or not the two will have intimate scenes. Sisley expressed her nervousness in working with the senior actor, “There haven’t been a lot of outtakes yet. I was already shy in front of him when we were filming – I didn’t even need to purposely act shy.”