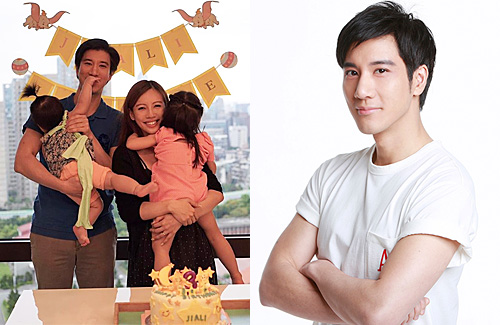 Married for five years, Leehom Wang (王力宏) and Lee Jinglei (李靚蕾) have been enjoying their new roles as parents to two girls. Their responsibilities are going to increase, as the family is expecting a new addition. It is understood that Jinglei is currently pregnant with their third baby!

This week, the normally private couple suddenly shared candid photos and videos of their married life with fans. On April 9, Leehom uploaded a topless photo of himself and complained that his wife did not appreciate his fine body, “I wonder how hard I have to train in order to get my wife’s notice? How much longer would it take before Jinglei pays attention to me?”

Jinglei immediately responded on Instagram and wrote, “You started it first! Candid camera war…has started.” True to her word, Jinglei secretly filmed a video of Leehom singing in the bathroom and shared it with fans.

While the sweet banter between the couple delighted fans, many were surprised by Leehom and Jinglei’s “openness”. It turns out that their playfulness and good mood may be due to a new baby joining the Wangs this year.

When reached to confirm the news, Leehom’s representative said, “Leehom is currently doing final rehearsals for his concert, and will not respond to this report for now.” It is speculated that Leehom will make the big announcement at his Beijing concert, which will be held on April 13 and 14.

At Leehom’s Beijing concert today, Leehom indirectly confirmed the news that he is an expectant father. A video clip of of a little boy running on the beach was seen. Leehom’s gesture was interpreted as saying that his son will be born this summer.

Note: This article was updated on April 13, 2018 to provide additional information that Leehom’s wife may be carrying a boy.

9 comments to Leehom Wang’s Wife is Pregnant; 3 Babies in 5 Years