After a three-year absence since her last TVB drama, Linda Chung (鍾嘉欣) makes a return in medical drama Kids’ Lives Matter <星空下的仁醫> and is drumming up talk for a Best Actress win this year. The 37-year-old actress prefers finding joy in the overall filming experience and said she is not interested to win TVB Best Actress.

When her contract ended after filming K9 Cop <警犬巴打> in 2015, Linda returned to her hometown in Canada and focused on her personal life. Getting married and eventually giving birth to two children, Linda wanted to raise her family in Vancouver where both she and her husband’s families also reside. “I’ve grown a lot in the last six years – nothing makes you mature faster than becoming a parent,” she commented.

When asked why she agreed to film Kids’ Lives Matter, Linda expressed she immediately bonded with her character. “Since I have two kids of my own, I especially felt a deep connection to shows about children. It was a lot of fun working with little kids. I’m pregnant in the show as well, and it’s very easy for me to get into character and I know exactly what it feels like.”

Asked what was the biggest challenge in her doctor role, Linda replied, “The dialogue – I had to make sure I memorized the medical terms correctly, and to use them naturally onscreen. My character in the show is super cool, calm, and extremely talented in the surgery room. I’m so happy that I got to play such a smart woman – there’s only one female cardiologist in Hong Kong!”

In the drama, Linda’s acting is layered and she naturally radiates maternal love when interacting with her pediatric patients. Linda responded, “Thank you! I put a lot of effort into playing the role and doing my homework. My screenplay is full of my scribbles and notes.”

Although excited by viewers’ feedback, Linda has not considered winning Best Actress for her performance in Kids’ Lives Matter. When she was in her 20s, she had focused on improving herself and trying to validate her acting. Now, she is only interested in doing what is suitable for her and learning along the way.

On Working With Kevin Cheng and Kenneth Ma 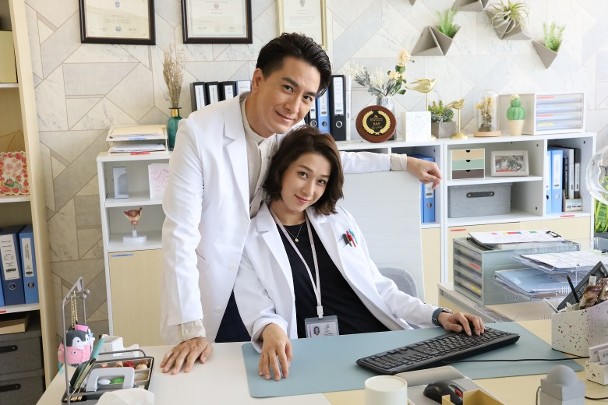 As Linda is not personally very close with main leads Kevin Cheng (鄭嘉穎) and Kenneth Ma (馬國明), she commented on what it was like to work with them. Sharing more scenes with Kevin, Linda commented, “Kevin is quite cool. Although we have a lot of scenes together, we didn’t communicate a lot. I didn’t have that many scenes with Kenneth.”

However, Linda was surprised at how well their onscreen chemistry worked out. “It just flowed naturally on set. We couldn’t guess how the other person would act during filming, so the reactions were all spontaneous. The freshness probably stems from the fact that the [acting] was not intentionally planned a certain way.”