Mandy Lieu Still Pregnant; Will Give Baby Her Surname 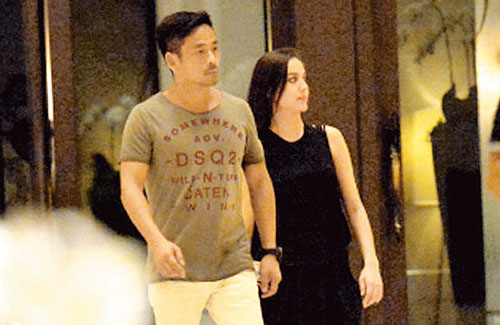 New photos of Mandy Lieu and her baby bump made their way around the Internet, confirming her pregnancy once and for all. Earlier shots of the slim model led to the speculation that she may have lost her baby, but the 30-year-old shared photos of her pregnant body online in April.

Alvin Chau’s (周焯華) high profile extramarital affair with Mandy Lieu has been on the public’s radar since last August, when Mandy confirmed that she was in a relationship with the Macau movie mogul. Following Mandy’s announcement, Alvin’s family affairs were once again put on the spotlight. In December, it was reported that both Mandy and Alvin’s wife, Heidi Chan (陳慧玲), were four months pregnant.

Surprisingly, Heidi is aware of and accepts Alvin’s affair, allowing him to visit Mandy frequently and take her on business trips.

Recently, a series of new photos of Mandy at the gym were shared on her friends’ Instagrams. In the first photo, Mandy was wearing a sports bra and holding up the English newspaper The Times, dated April 7, 2015. The photo suggests that Mandy may have been resting in the United Kingdom at the time, and she was holding up a newspaper to document the time of her pregnancy.

In another photo, Mandy was seen doing a difficult pilates move in the gym. Lying beside her was a May 2015 edition of In Style magazine. In the shared photos, Mandy clearly looked pregnant, but her belly did not look large enough to be seven months pregnant as reported earlier.

The press obtained a series of new photos featuring Alvin and Mandy in Paris, which were allegedly taken by their friends. In the photos, Alvin and Mandy were hugging each other, looking like a young couple in love. Alvin sweetly caressed Mandy’s cheeks and kissed her. The photos were widely circulated among Alvin’s friends on WhatsApp.

According to a source, Mandy plans to give her child her surname, Lieu. However, Alvin was extremely against it and is trying to convince Mandy to reconsider. The source said that that Mandy does not want to interfere and burden Alvin’s own family, and that her decision to stay with Alvin was because she truly loves him. Alvin, however, said he wants to give his child the proper status.

6 comments to Mandy Lieu Still Pregnant; Will Give Baby Her Surname