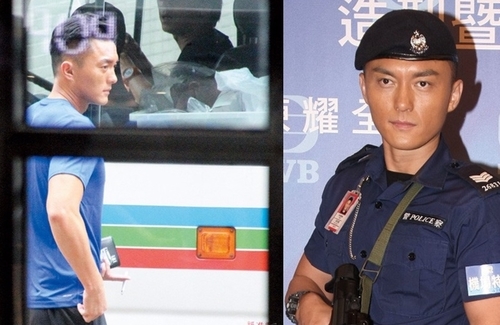 Currently heavily promoted by TVB, Mat Yeung‘s (楊明) rise to stardom was 20 years in the making. Not only is he filming dramas back to back, but his love life is also a smooth sailing ship. The 38-year-old is often caught on dates with his girlfriend of three years, Lisa Ch’ng (莊思明), and they’re frequently rumored to be tying the knot soon. Thanks to his good image as a boyfriend, the audience is becoming more and more accepting of this leading actor.

Despite his positive image, Mat has one bad habit that he can’t break. Earlier, reporters noticed him take a smoke break while he was filming an outdoor scene for the upcoming TVB drama Airport Strikers <機場特警>. The scene, which is about him going to the gym to work out, required Mat to don sportswear and showed off his muscular chest and arms.

Once he was allowed to take a break, the actor quickly ran to the middle of the streets to smoke while many cars dangerously passed by him in close proximity. Smoking is not only harmful to one’s health, but it can also have a negative influence on one’s image. Hopefully, fans are not disappointed by his smoking habit.

1 comment to Mat Yeung Is Unable to Break Smoking Habit