Artists 30-year-old Matthew Ho (何廣沛) and 29-year-old Katy Kung (龔嘉欣) flew to Hawaii earlier to shoot TVB travel program Fun Abroad <3日2夜>. Right before a new episode aired yesterday, Katy promoted the show by uploading her swimsuit photo onto social media. Matthew followed suit and posted an image of himself wearing a full body swimsuit on Instagram. However, netizens were unhappy with the full coverage and asked him to show his muscles.

The actor obliged and shared another photo of himself – this time topless to appease the netizens. He said, “I didn’t want to shoot a bland travel program for everyone, so I made the decision to gain some muscles. This decision was my personal wish and not something the production team suggested.”

He saw results within a short two months, although neither long nor short, it was God’s answer to his prayers as it was the first time he really worked out in his 30 years of life and he was also filming at the same time. For Matthew to specially train his body for a short scene in the travel program really shows his sincerity. No wonder rumored girlfriend Rebecca Zhu (朱晨麗) also praised him in an earlier interview. She said he only ate chicken breast and had to give up his favorite hotpot in order to gain muscles. “It was painful to watch!” she exclaimed. Clearly, his sacrifices did not go to waste. 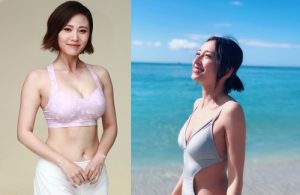