Myolie Wu and Bosco Wong Both Spotted in Japan 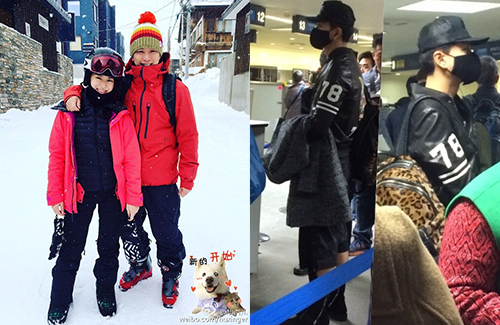 Newlyweds Myolie Wu (胡杏兒) and Philip Lee (李乘德) are currently enjoying a snow-filled vacation in Hokkaido, Japan, the first stop for their honeymoon. On social media, Myolie shared a picture of her and Philip looking happy and cozy in matching winter jackets, which were in bright red colors that suited their newlywed status. Myolie said, “[I’m] such a country bumpkin. First time snowboarding!”

Coincidentally, Myolie’s former boyfriend of eight years, Bosco Wong (黃宗澤), was also seen in Japan, albeit for different reasons. Bosco’s father had passed away in December, about two weeks before Myolie’s wedding on December 28. Though Bosco was invited—and he even said he would go—Bosco ultimately did not attend because he was in mourning of his father.

At around the same time Myolie and Philip were in Hokkaido, a netizen spotted Bosco and his male assistant at the Fukuoka Airport. Bosco was dressed entirely in black—black coat, black shorts, a black snapback, and a black mask, most likely to prevent others from recognizing him.

Bosco confirmed yesterday that he did go on a trip to Japan with a friend to relax himself.