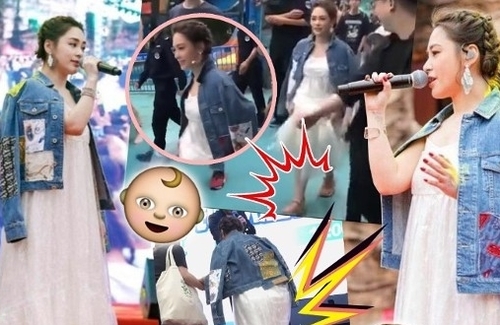 Hong Kong singer Gillian Chung (鍾欣潼) worked hard to lose weight for her wedding last year, but after she married her Taiwanese beau Michael Lai (賴弘國), also known as the “Sunny Wang (王阳明) of the Medical World,” she has been gradually gaining weight. Although some people made fun of her for being “happy fat,” there’s a possibility that she’s actually pregnant!

A few days ago, Mainland netizens shared pictures of Gillian at an event, and she appeared to be a size bigger. Even her white loose-fitting dress and denim jacket couldn’t hide her swollen face, bigger arms, and thicker waist. Previously, the singer said she needed to lose weight and revealed she went from eating seven meals a day to just one meal a day. However, her diet plan doesn’t seem to be effective. Or perhaps she is similar to Roxanne Tong (湯洛雯) in that they both can’t slim down quickly.

During the event, Gillian required the help of the staff when she got on and off the stage. After the event, she even switched out of her high heels and into flat shoes immediately. Her actions led some netizens to believe she is actually pregnant and caused many fans to congratulate her.

Still, both Gillian and her manager Mani Fok (霍汶希) denied the pregnancy rumors. Mani said, “I will tell Gillian to lose weight. In fact, the couple does have plans to have a baby but not this year. She is not pregnant.”