Her revelation hurt Juno Mak, who supported and defended her publicly.

With the recent news of Gillian Chung (鍾欣潼) and Michael Lai‘s (賴弘國) divorce, many fans are disappointed that the 39-year-old star couldn’t find long-lasting happiness in a relationship. Looking back at Gillian’s romantic history, actor/ director Juno Mak (麥浚龍) was the one partner who stood out the most. He had stayed by her side throughout Gillian’s nude scandal in 2008, which was the lowest point in her life. Although he was ready to do anything for Gillian, Juno was later hurt by her words.

Loneliness Followed the End of Every Relationship

Forming girl group Twins with Charlene Choi (蔡卓妍), the two won the adoration of many teenage fans at the height of their popularity. Gillian has always been known for her beautiful looks, with Edison Chen (陳冠希) and Shawn Yue (余文樂) almost getting into a fist fight over her once.

Soon after joining Emperor Entertainment Group, Gillian started dating Edison and later revealed in interviews that they were together for a period of four to five years. While they were dating, rumors of her being with Shawn Yue and Alex Fong (方力申) surfaced, and more of her various romantic entanglements continued for over 10 years, showing how much Gillian craved security from her relationships.

She said, “My first boyfriend instilled the idea that one dating partner should follow another, so I’d be overcome by loneliness every time I ended a relationship.”

The infamous nude photo scandal in 2008 thoroughly shattered Gillian’s good girl image, nearly destroyed her career, and caused her to be dropped by sponsors, with all her work coming to a halt. The lesson she learned from the scandal was an important one. “I am someone who trusts others easily, true friends are hard to come by and my family would also remind me to be careful of someone or other, now I’d listen and take time to observe someone. This is really important.”

Juno Defended Her Despite Dad’s Opposition 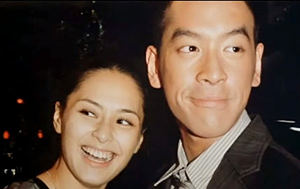 Rumors first surfaced between Gillian and Juno in 2007 when they worked on the set of the film Trivial Matters <破事兒>. Their relationship came to light when the media spotted them wearing similar rings.

With Gillian’s emotions diving to a new low during the nude photo scandal, Juno took good care of Gillian and gave her lots of support. He allowed Gillian to hide from the hounding media at his luxury apartment, and supported her publicly while berating the unethical press and those who disseminated the photos.

There were even rumors that Juno, the son of CCT Telecom Holdings director Clement Mak (麥紹棠), had the intention of forking out $100 million HKD to fulfill her contract and to marry her. Despite his father’s strong opposition to their relationship, Juno remained unwaveringly loyal. Possessing talent, riches, and loyalty, Juno was a great catch by any standards, and many had thought the two would get married after weathering stormy times together, with Gillian becoming a wealthy housewife and finally being able to put her painful past behind. Yet it was not to be.

Gillian Loved Edison the Most

In 2009, Gillian was interviewed on Be My Guest <志雲飯局> when she revealed that she had zero income the previous year due to the impact of the nude photo scandal. As the sole breadwinner of her family, she was immensely pressured but thankful to receive help from Juno and his family. On the show, she described him as “really loyal” and “the most reliable.”

When chatting about her former lover Edison, however, she actually said that he was the person she loved the most. Not being able to win her heart despite giving his all to protect Gillian without regard for her past, Juno was understandingly heartbroken by her revelation.