Newly Married Gaile Lok Ready to Be a Mom 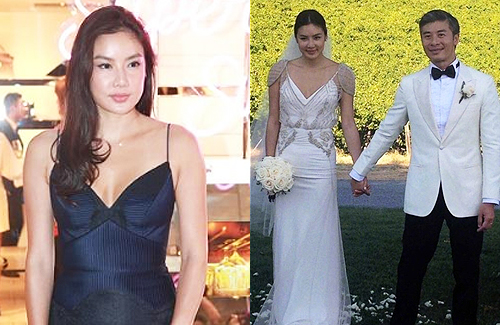 After splitting from Leon Lai (黎明) five years ago, Gaile Lok (樂基兒) married organic food entrepreneur Ian Chu in August. Their simple wedding was held in California, with approximately 50 guests in attendance. Leon, who maintained his distance after their divorce, was not invited to the wedding.

After her divorce, Gaile originally did not have plans to get married again. Since Ian had also experienced a previous marriage which had ended in divorce, he and Gaile were extremely compatible in their relationship. Dating for two years, Ian proposed to Gaile in the spring.

Feeling anxious due to the wedding planning, Gaile fell ill after the reception and did not get a chance to go on her honeymoon yet. Needing time to recover, Gaile said they will go on an African safari at the end of the year instead.

Reflecting on special moments from her wedding, Gaile was especially moved to see her friends travel such a long distance to attend the reception. Since the weather was very hot in California, the couple kept the exchange of their vows to be only two minutes and did not have a long love declaration. Both Gaile and Ian did not cry on their wedding and simply enjoyed the happy occasion together.

The 37-year-old said she did not have any plans to have a baby yet, but if it happens she is open to starting a family. “I won’t plan it and give myself stress. I’ll let things happen naturally. I’m ready anytime though, but will not intentionally try [to get pregnant]. My husband does not particularly want to have a baby. We don’t really mind [either way].”

Although the couple chose to get married in California, Gaile and Ian will continue to work and reside in Hong Kong. Gaile next projects will be hosting a cooking show and starting a new company to promote healthy lifestyles.