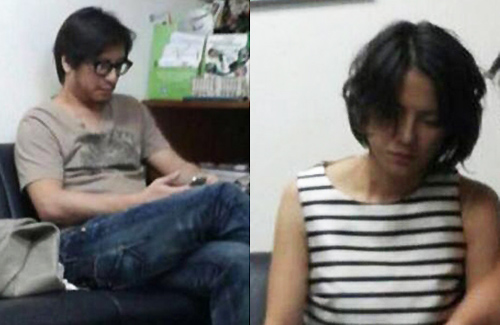 Above: Oxide Pang toys with his cell phone while wife, Angelica Lee, is in obvious discomfort during a hospital visit.

Despite director Oxide Pang’s (彭順) public apology in cheating on his wife, Angelica Lee (李心潔), many view his words versus actions to be contradictory. Known to have a preference for young models, Oxide has reportedly been living together with Liddy Li (李悅彤) for almost a year while Angelica resided in Malaysia. Since the affair was exposed, Oxide has not had a clean break with Liddy yet. While Angelica and Oxide released a joint statement expressing their intention to work out the problems in their marriage, the couple was photographed in Malaysia in a tense state.

Does Not Care About Wife

A netizen shared a photo of Angelica visiting a hospital in Malaysia this week, with Oxide sitting negligently to the side. Tired, and without much energy, Angelica sat in the clinic with needles in her right arm for a blood test. Oblivious to Angelica’s pain, Oxide sat on the side, opting to play with his cell phone instead. Angelica’s face was contorted in obvious distress, while Oxide did not show an ounce of care towards her poor health condition during the visit.

Although Oxide flew to Malaysia immediately to see Angelica after his affair with Liddy surfaced, it is rumored that Angelica has had the last straw. Perhaps only accepting Oxide’s apology as a façade, it is speculated that Angelica has intentions to file for a divorce because she cannot stand him his infidelity any longer.

Before Angelica’s marriage to Oxide, the award-winning actress had a bright acting career. She set aside her prime years to raise Oxide’s daughter from his previous relationship, allowing him to work without any family distractions. Angelica loved her stepdaughter as her own, and chose to raise her in Angelica’s native hometown in Malaysia.

When the couple exchanged marriage vows in 2010, Oxide expressed his gratitude towards Angelica’s sacrifices. He promised to “love her for fifty years” and that he “will not treat her poorly and doubly repay her love.”  Despite Oxide’s love declaration, he ended up hurting Angelica in the deepest way possible through his infidelity.

Despite everything that they have gone through together, Angelica and Oxide’s 12-year relationship started dying last year– coincidentally, around the same time Liddy entered the picture. Angelica may have gotten tired of Oxide’s playboy habits, or their marriage took a toll because of long-term separation.

Adding to the problems, Oxide is known to have a passion for gambling. In his free time, he enjoys going to Macau and visiting their casinos. It is said that he roughly loses $500 000 HKD a night.

On June 8, Angelica is scheduled to appear at a ribbon-cutting ceremony for a tai chi establishment in Malaysia. It will be her first public appearance since the outbreak of Oxide’s affair. Although Angelica appeared to be strong in her public statement over the state of her marriage, her latest photo at the hospital revealed her stressed state. Fortunately, Angelica has her good friends, Charlie Yeung (楊采妮), Gigi Leung (梁詠琪), and Valen Hsu (許茹芸), to support her through this difficult stage.