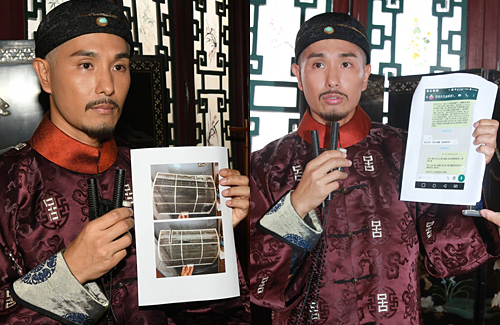 Recently caught in a dispute over various issues with his landlord, Ruco Chan (陳展鵬) had no choice but to take legal action.

According to a report, the landlord accused Ruco of breaking several clauses on his renter’s contract, including Ruco moving out before his two-year lease ended, refusal to pay the last month’s deposit, as well as destroying appliances.

Attending an event for his new series, Succession War <天命>, Ruco denied all the allegations, “I discovered a loose board in the wooden floor and sent a video clip to the landlord. The board was jutting out and was very dangerous. I hope he would fix it, but he continued to drag his feet and did not repair it.” Because of this, Ruco’s mother fell on the floor and was hospitalized.

“The landlord said he needs the key back. Since my mother couldn’t walk and is wheelchair bound, and I was not in Hong Kong, I left the key with my assistant to handle the matter.” Since the landlord could not reach Ruco, he went straight to the press and accused Ruco of breaking the lease agreement.

Angered by the slander, Ruco clarified that the dispute has been taken care of three months ago, but was uncertain why tabloids recently reported on the issue. “Is this happening only because I’m an artiste? I work with cameras, even if I’m clueless about things, I know the basic responsibilities of a tenant. I’ve kept screenshots of our WhatsApp conversations, but I just thought this issue was already taken care of.”

Ruco proceeded to show a printed copy of his WhatsApp conversation in order to clear his name to reporters.

Denying that his lease was for two years, Ruco said the agreement allowed him to move out within the year given that he provides one month’s notice in advance. He has been paying $30,000 HKD for an 800-square-feet apartment in Tseung Kwan O. Stating that he maintained excellent relationships with his previous two landlords, Ruco was confused as to why this landlord decided to turn against him.

In terms of the landlord accusing him of nailing down the air conditioning machine, Ruco exclaimed, “Why would I do that? If I did, then both my hands will break!” Upset that he would be even accused of something so petty, the TV King explained that he fixed parts of the house with his own money after moving in, including a paint job, fixing the fuse box, and getting a new gas furnace. Having kept all of the receipts from the renovations, Ruco said he often offered to help whenever he could.

Lamenting that this should not be happening just because he is an artiste, Ruco said he would not be too bothered by this issue anymore and will let his lawyer defuse the situation.

“I, Ruco Chan, do not like to explain things [publicly]. But I hope the media doesn’t interview my mom, who is in critical condition now. You can go to Ruttonjee Hospital and check the records to find out what happened. My mom’s situation would get worse if she sees camera lights flashing.”