In recent months, Samantha Ko‘s (高海寧) dramas have been broadcast consecutively, but she still manages to give viewers new surprises each time. Starring in Death by Zero <殺手>, On-Lie Game <迷網>, and Al Cappuccino <反黑路人甲>, Samantha successfully portrayed diversified characters. Though the 33-year-old actress’s entertainment career was not always smooth-sailing and she was typecast in her early career, Samantha is finally gaining more recognition and receiving increasing filming opportunities.

Initially known for her voluptuous figure, Samantha was branded a flower vase, making it difficult for her to break out of the stereotype. The former Miss Hong Kong contestant said, “Becoming known overnight because of a great figure is a good thing. At the very least, you bypass over the phase when no one knows or recognizes you. However, this [voluptuous] image of me is too ingrained in people. I had to spend years trying to break away from this image. It was difficult. A lot of people will gain recognition after filming a scene or two, but for me, it took me years of filming. The audience primarily focused on the revealing aspects of all my scenes, which made me really frustrated.” 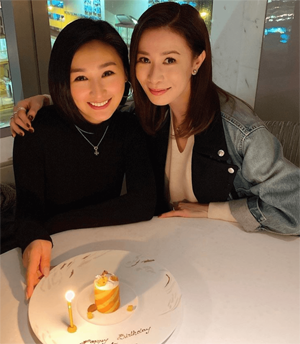 With more than 12 years in the industry, Samantha met many great friends and acquired a lot of good advice from more experienced actors. Specifically, Samantha recalled the advice given to her by Charmaine Sheh (佘詩曼), who encouraged her to continue doing her best.

“Charmaine told me that no matter how many scenes I have, or whether it is a main character or supporting character, I have to always put in the effort and film as though I was the main focus in my scenes. As long as you work hard and do your very best, people will eventually notice you. Since then, I have embraced this perspective and worked hard in all my roles. I have never put in minimal effort just because I was a supporting character.”

Her hard work eventually paid off and viewers started noticing Samantha’s acting instead. She enjoys fleshing out her characters so that each performance leaves viewers with a distinct impression. Finding happiness in viewers’ praise towards her role in Al Cappuccino, she said. “In the past, producers typically liked casting me in calm and sophisticated characters. In On-Lie Game, my character is restrained. Then in Death by Zero, my character is very logical. In Al Cappuccino, however, my character has extreme emotional fluctuations. When she is happy, she is very happy, but when she is sad, then she will torment those around her. The range in which I can portray the character and its breakthrough potential is extremely high.”

Happy in Being Herself

Through her onscreen roles, Samantha has continued to grow as a person. “Through my characters, I am able to experience life in many different ways. I’ve realized that there are so many different types of people in the world who have different views and perspectives on everything. I reflect on myself and wonder whether I am too stubborn about certain things. I’ve discovered more of myself through my characters and improve myself through these lessons.”

In addition to her filming roles, age has also contributed to Samantha’s life experiences and increasing maturity. She is now a happier and more confident person. “Before I turned 30 years old, I would do things outside of my norm in order to prove myself and make other people like me. However, it was only after I turned 30 years old that I realized I was living for other people and was not living for myself. I decided to turn the focus back on myself. Cutting my hair short was a way of testing how I can change my image. As I cared less and less about what other people thought, more people started appreciating me.”