Shirley Yeung Asks Gregory Lee Out For A Negotiation; Hopes To Get Back Her Beloved Dogs 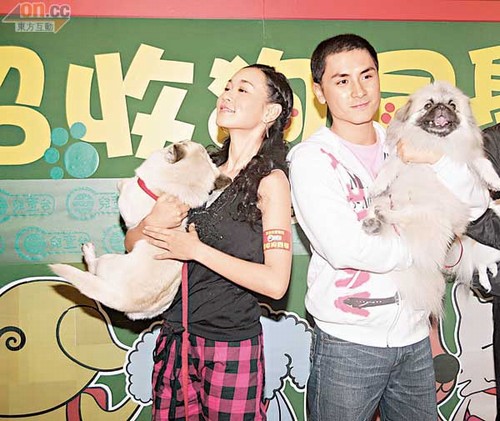 According to Hong Kong media reports, after Shirley Yeung (楊思琦) drastically broke up with Gregory Lee (李泳豪), the six pug dogs that they used to take care of together, are now being looked after by Gregory. Some said that Shirley did not care one bit about those dogs. To which Shirley finally opened her mouth yesterday and expressed that there will surely be a method to resolve this and will be discussing with Gregory for their adoption rights.

After Shirley unilaterally announced her break up with Gregory, the six pug dogs that they used to raise together has been, as usual, staying put in the Lee family’s home. The dogs were properly cared for by Gregory and his mother, Shih Ming (施明). It was known that Gregory loved these beloved dogs to bits and professed that even if Shirley didn’t want them, he would raise them all by himself.

Shirley had always adopted a “mute” approach and refused to comment regarding the Lee family’s allegations since her break up with Gregory. However, when mentioned of her beloved dogs, Shirley finally couldn’t withstand her silence anymore. Yesterday when the reporter called Shirley, she opened her mouth and said, “It’s not that I don’t care about those dogs; don’t misunderstand.  Prior to this, I had already analyzed this problem together with Gregory’s family.” Shirley did not eliminate the possibility that she might discuss with Gregory about the handling of those dogs, “There will of course be a way to settle this matter. I will see how to discuss this but don’t wish to have to address everything with the media”

As for Gregory, he was currently situated at Huizhou, China to indulge in some test-driving of cars for the August car drifting competition. When contacted, Gregory had a significant improvement in his mood and expressed, “I only wish to focus on my performance as of now. If Shirley is willing to discuss then of course I’m all for the discussion too. When I return to Hong Kong then I will clearly find out from her what’s the matter about.”

The reporter also called Gregory’s father, Lee Ka Ding (李家鼎) aka Ding Yeh, yesterday. When told that Shirley made it clear that she will not neglect her dogs, Ding Yeh uncouthly said, “Unnecessary [expletive]! She’s out of her mind! Just look at how the dogs will be in the future!” (Did Shirley ever ask the dogs to be returned back to her?) “Never heard of it before!”

Ding Yeh also remarked that over the course of dating Gregory, Shirley never brought her dogs back to her maternal home. When asked whether the reason was that Shirley’s mom did not like the dogs, Ding Yeh replied, “Don’t dare to say! But Shirley’s condominium doesn’t allow them to rear dogs anyway!” Ding Yeh also pointed out that even if Shirley brought those dogs back home, they will still eventually be sent off to the SPCA and be put to sleep (euthanasia).

Gregory’s mother, Shih Ming, who accepted a telephone interview yesterday, frankly said that she single-handedly took care of the six pug dogs all along. Shih Ming said, “Regardless of how tough it is, I will still continue to take care of them.  They are my lifeblood!” When told that Shirley said she would discuss the adoption matters of those dogs with them soon, Shih Ming said, “I will not answer this question as of now, will not handle it first. Let’s wait for everyone to decide.” (Did Shirley ever want those dogs back?) “No, no such thing.”

36 comments to Shirley Yeung Asks Gregory Lee Out For A Negotiation; Hopes To Get Back Her Beloved Dogs