Sisley Choi on Self-love and Growth 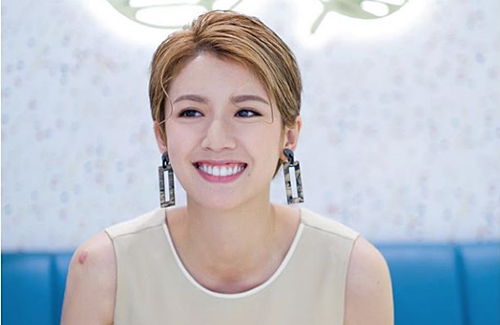 Growing up overseas, Sisley Choi (蔡思貝) always had a love for the outdoors. Unlike her fellow female artistes, Sisley enjoys outdoor activities and does not mind getting tanned. Perhaps due to her more active and outgoing personality, Sisley has always portrayed strong-minded and determined characters. In a recent interview, Sisley admitted to sharing similar traits with her characters on-screen.

“My personality is rather extreme. When I get stubborn about something, I am very stubborn. Things are black and white for me, especially when I am dealing with my loved ones. Even if we argue to the point of hurting the relationship, I would not give in and put up with being wrongly accused of something. People say that even if you win an argument, you lose the relationship. I have this type of stubbornness and it is something that I need to work on changing.”

Candidly reflecting on her own weaknesses, Sisley found it difficult to deal with work pressure and negative rumors. Diagnosed with bipolar disorder two years ago, Sisley realized the importance of self-love in healing her emotions. “In modern times, society’s perspective on women is too cruel, so women need to learn to love themselves. In a world that is moving and advancing so quickly, if you fall behind, then you will be eliminated. I believe that self-love is something that you have to do along with the changing times. You shouldn’t let yourself go and become obsolete. It is only if and when you learn to love yourself first that others can love you. I say all this, but it is easier said than done. I am not able to achieve this yet either.”

As a celebrity, Sisley believes that she is in a role to influence others, whether big or small. In Airport Strikers <機場特警>, her role as Sun Jai has captured the attention of many children. While filming outdoors recently, Sisley was approached by a group of children that were fans of Airport Strikers and her character in the drama. Recalling the incident, Sisley shared, “The drama [Airport Strikers] has a lot of younger audiences. During filming, a group of children approached Owen Cheung (張振朗) and me and asked how my character is so cool. I told them that to be cool like that, they needed to exercise more in order to have a strong body and to do well in school. They took it all in very attentively. Even through simple words like that, I influenced them to a degree. We ‘public figures’ have these small levels of influences here and there.”