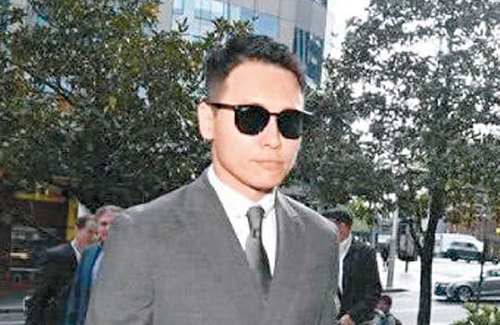 Although rising to popularity after his performance as the loyal King of Yiqu in hit series, Legend of Mi Yue <羋月傳>, 37-year-old Chinese actor Gavin Gao (高雲翔) hit rock bottom when he was faced with sexual assault charges in Australia since last year. Currently entering the trial phase of the case, Gavin appeared in court yesterday in extremely low spirits.

After being arrested for sexual assault with his producer friend, Wang Jing (王晶) in March 2018, Gavin faced severe backlash from the public. Gavin’s financial assets have been frozen and he is sued by Zhejiang Talent for 60 million yuan, as the actor’s trial has impeded the broadcast of drama Legend of Ba Qing <赢天下>.

The trial date has been pushed back twice, but the victim was nowhere to be seen despite being scheduled to appear in court. According to the lawyers, the victim’s appearance in court is expected to be a major factor in influencing the jury’s decision and if Gavin and Wang Jing will receive a guilty verdict. If she refuses to testify in court, the defendant can put in a request to have the case closed, or the prosecutors can request to have the trial delayed and officially summon the victim.

Evidently absent during the trial was actress Michelle Dong (董璇), who filed for divorce with Gavin after he was charged with sexual assault. Despite their separation, it’s speculated that she still cares for him. Michelle’s male assistant was present with Gavin at the courthouse during the trial.

Gavin Gao Rides Bus to Save Money After Assets Were Frozen