Vincent Wong and Yoyo Chen Watch “Inside Out” On Movie Date 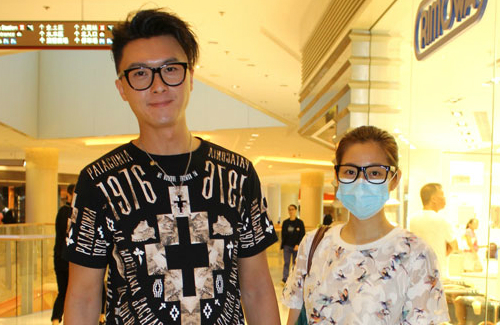 Half a year ago, Vincent Wong (王浩信) and Yoyo Chen’s (陳自瑤) marriage allegedly hit a rocky bump after reports suggested Vincent was flirting with costar Jacqueline Wong (黃心穎) on set new TVB series, With or Without You <東坡家事>. Despite reports claiming Yoyo was enraged and the couple had slept in separate rooms, she supported her husband and denied such speculations in front of the press. Yesterday, Vincent and Yoyo were spotted out on a loving movie date in complementary outfits.

The couple was spotted in West Kowloon’s Elements shopping mall at around 5:00p.m. Vincent donned a black t-shirt and a pair of black-rimmed glasses. Yoyo was dressed in a white top and a pair of matching glasses. They first stopped outside a Japanese restaurant to examine its menu. Next, they headed towards the cinema where Yoyo pointed around and chose the film for the night. Vincent kept silent and went along with his wife’s decision.

After purchasing the tickets, the two headed back to the Japanese restaurant for dinner. Holding hands, they did not exit the restaurant until an hour later. After glancing around in a high-end purse shop, Yoyo headed to the washroom while Vincent patiently waited outside.

Reporters approached the couple as they went back towards the theatre. They continued to hold hands and even generously posed for photos. When asked which movie they were going to watch, Vincent appeared unsure and expressed hesitantly, “I think it’s a cartoon film!” Yoyo then added they were going to see the Disney movie, Inside Out. Wearing a face-mask, she admitted feeling a bit ill.

TAGS: Jacqueline Wong, Vincent Wong, With or Without You, Yoyo Chen