On August 3, TVB executive Virginia Lok (樂易玲) attended a press conference regarding a newly launched online acting course and auditions for a web drama and a micro-film. As Virginia is seeking new blood for TVB, reporters asked her if actress Jacqueline Wong (黃心穎) will be making a comeback since Andy Hui (許志安) has already made his return following his cheating scandal with Jacqueline. Although Virginia does not know when Jacqueline will return, she believes in second chances and is eager to meet with the actress once the time is right. 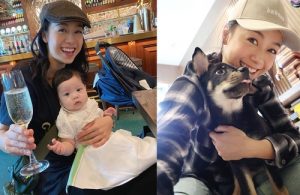 Virginia’s statement marks the first sign of a possible comeback since Jacqueline returned to Hong Kong from the United States last December. Still frozen by TVB, Jacqueline is waiting for the audience to let bygones be bygones and accept her again. When reporters asked Virginia whether she has plans to cast Jacqueline in a web drama to test the waters, Virginia responded, “I haven’t thought about that yet. I wanted to ask her out to meet and chat, but no one wants to go out now due to the pandemic situation. I’ll wait until the situation isn’t as serious before we decide.”

She added that they have been in contact with each other. “We talk on WhatsApp, but I really want to meet up with her to see her current condition,” Virginia expressed.

She also shared that they have not discussed her past scandal and that Jacqueline has always been very positive. Even so, Virginia is unsure when Jacqueline will be unfrozen. She expressed, “I’ll respond to such a tough question later. I need to talk with her and the company first. I also have to consider if I’m helping her or harming her if she makes a return now.”

Virginia later expressed her support for Jacqueline and honestly said, “Everyone makes mistakes. It depends on how serious her mistake is, and whether or not she can climb back up again. We shouldn’t give up on her, but it all depends if the timing, place, and relationships are aligned in her favor .”