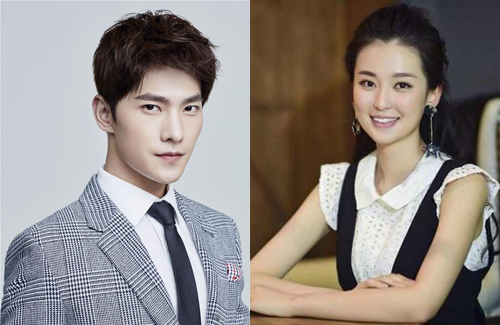 After fans dug up secondary Weibo accounts for both Yang Yang (楊洋) and Bridgette Qiao (喬欣), many netizens believe that they’ve been dating for a quite some time.

The rumors first began when Yang Yang was spotting shopping in London over the Valentine’s Day holiday with a mysterious woman. They were seen buying a luxury designer bag and then going to a nearby restaurant for Valentine’s Day dinner. While some keen-eyed fans speculated that the woman was Bridgette at that time, Yang Yang’s manager shut down the rumors and stated, “There’s no such thing. How can that be possible? They’ve been classmates for so long; if anything were to happen, it would’ve happened a long time ago.”

The news seemingly died down until several days ago when Bridgette shockingly revealed that she has a second personal Weibo account during an interview. Fans then immediately did some digging and found an account that liked and un-liked a couple of Yang Yang related posts.

On the other hand, while Yang Yang never stated he had a private second account, the actor recently gave himself away when he uploaded a selfie earlier this month. When photos are uploaded on Weibo, they usually bear the user’s account name as a watermark – however, on this selfie, the watermark was from an unknown different account. Using the watermark as a clue, fans immediately dug up this random account and found out that the only actress he was following was Bridgette.

Quickly trying to explain himself, Yang Yang then posted an update and said it was due to a Weibo glitch.