The new dad keeps himself busy, re-appearing at the hospital late at night.

Welcoming the birth of his first child with an announcement on Weibo, William Feng (馮紹峰) was seen leaving the hospital for the first time yesterday. Driving back again after three hours, he appeared with a baby basket in his hands, prompting fan speculation that Zanilia Zhao (趙麗穎) and the newborn will be leaving the hospital soon too.

According to Chinese press, William was seen exiting the hospital carrying a baby basket. Seeing members of the press, he said, “Thank you everyone, please go back earlier to rest.” Dressed in full black with a cap and face mask, he was spotted going back and forth and lingering in the hospital, again returning later at night. Seeing him with the baby basket also made fans excited about his wife and son’s impending discharge.

Making Everything Official via Social Media

William had personally announced the happy news of the baby’s safe arrival on March 8. There were rampant rumors of the actress being pregnant even before the couple tied the knot, as well as recent news that her due date was in early March. Keeping a low profile, Zanilia initially chose to deny the pregnancy rumors and had made few official replies. However, it seemed that as with the marriage, their modus operandi seemed to be denial, followed by making things official via social media.

While the announcement of the baby’s birth prompted some nasty comments from netizens calling Zanilia a liar, there have also been others who took the actress’ side, defending her by saying, “It is a tradition to keep mum before the first trimester”; “celebrities are human too”; and “stop making sarcastic comments on the big day”. 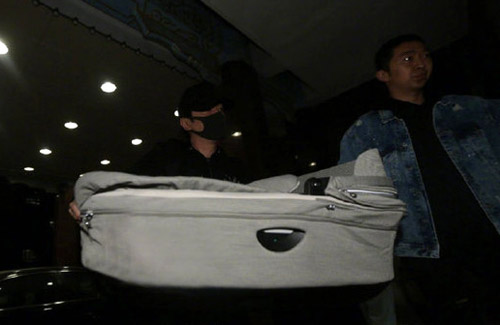