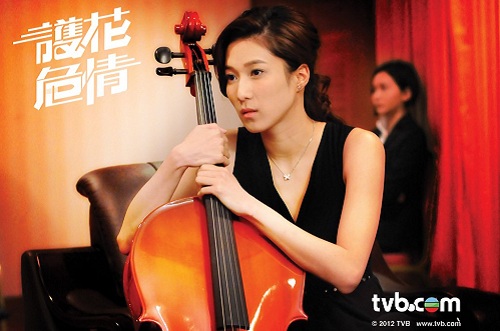 Since its premiere episode on July 2nd, Witness Insecurity has achieved a high average rating of 31 points, averaging 1.92 million viewers per episode. The drama has already broken even with The Hippocratic Crush’s overall ratings, which currently tops the drama ratings list with 31 points. Last week, the ratings for Witness Insecurity increased again, raking in an average of 32 points and a peak of 35 points, averaging 2.05 million viewers per episode. With still one week of broadcast left, Witness Insecurity is expected to end with a strong finish, and perhaps top The Hippocratic Crush as this year’s highest rated TVB drama!

Linda Chung to Treat Cast and Crew for Dinner

Linda said, “It’s been 8 years since I’ve joined the industry, and I’ve never had such great feedback for my dramas before. The audience say that not only is the storyline attractive and fast-paced, the theme song is also great! On the night of the finale, I will treat the cast and crew to dinner for the first time.”

Linda also said that she has already contacted her costar, Bosco Wong (黃宗澤), who is currently filming in mainland China, about a dinner gathering to watch the finale together. She hopes that he will be able to attend on Friday night.

Viewers recently claimed that Witness Insecurity had plagiarized a plot from the 1991 ATV drama The Cops Affairs <大提琴與點三八>, which starred Joey Meng (萬綺雯) as the daughter of a triad leader, and Jackie Lui (呂頌賢) as a CID Inspector. Similar to Linda and Bosco’s characters in Witness Insecurity, Joey’s character was a professional cellist who fell in love with Jackie’s character. When asked of her thoughts on the plagiarism claims, Linda said, “I’ve never seen The Cops Affairs before. Did the female lead have behavioral problems? Since she doesn’t, I’m sure it’s just a coincidence.”

Asked if Witness Insecurity will have a sequel, Linda said TVB did not give her official notice yet.

279 comments to “Witness Insecurity” Expected to Defeat “The Hippocratic Crush”