Won’t Put on Her Own Shoes: Is Angelababy a Diva Behind the Scenes? 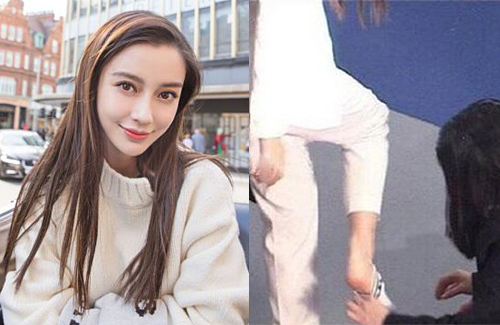 Twenty-nine-year-old Angelababy’s (楊穎) fame rose significantly these past few years given the popularity of Mainland Chinese variety show Keep Running <奔跑吧兄弟> as well as being Huang Xiaoming‘s (黄晓明) wife. But has wealth and fame turn Angelababy into a diva?

Ever since Angelababy transitioned her work to Mainland China, her many years of hard work and commitment to the industry has led her to become one of China’s most bankable actresses alongside Cecilia Liu (劉詩詩), Yang Mi (楊冪), and Ni Ni (倪妮). With Angelababy’s rise in popularity, the 29-year-old actress’ every move is scrutinized.

Angelababy Can’t Put On Her Own Shoes? 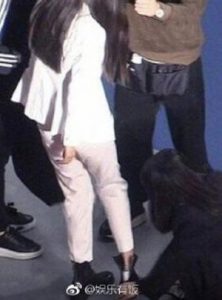 Recently, a netizen posted a photo of Angelababy’s assistant kneeling down to put on the actress’ shoes for her, which sparked argument and debate on the Internet. In the photo, Angelababy was surrounded by a group of staff. The photo was captioned, “How much does her assistant make annually? Can’t believe she even needs an assistant to put her shoes on.” This picture has sparked so many comments on the Internet including calling her a “princess” in which she needs others to do everything for her, or asking if she was “disabled”.

On the other hand, there are many supportive fans who see the action as normal because there are also countless staff members who assist with hair and makeup to maximize efficiency. Her supporters instantly backfired the discussion with comments such as, “This type of work is meant to be done by assistants”; “Do you expect her to put her own shoes on and then wait in the dressing room”; and “This is what happens when you spend money on an assistant.”

Though the discussion has caused much argument, others just felt that netizens are creating an unnecessary commotion over a small action.

17 comments to Won’t Put on Her Own Shoes: Is Angelababy a Diva Behind the Scenes?