Since August, Mainland Chinese actress Zanilia Zhao (趙麗穎) has been rumored to have gotten married because of her pregnancy. On October 16, she finally announced she has wed Feng Shaofeng (馮紹峰). Although the couple dodged all questions regarding pregnancy, a recent photo of Zanilia’s ultrasound was leaked to the public.

The photo was spread online with it being titled, “Zanilia Zhao’s Ultrasound Report” – leading fans to discuss among themselves whether or not the speculations were true. One fan even disclosed that Zanilia has been frequently visiting a health clinic and is roughly five-months pregnant. The anonymous source said, “She’s due in March 2019. The doctor she visited was my friend’s teacher.”

However, in reality some keen-eyed netizens did reportedly see Zanilia visiting a clinic for check-ups, although the actress’ representatives quickly denied the rumors, stating “There is no such thing.”

Neither acknowledging or actively denying the reports, Zanilia has been actively covering her belly area – whether with her hands or with a box–in recent social media photos. With the 31-year-old actress currently on hiatus from filming, the public took that as an indication of a possible baby on the way and already began leaving various congratulatory messages and blessings on Zanilia’s social media account. 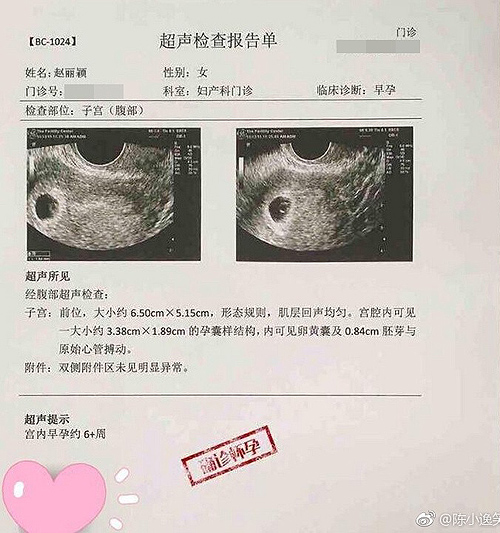