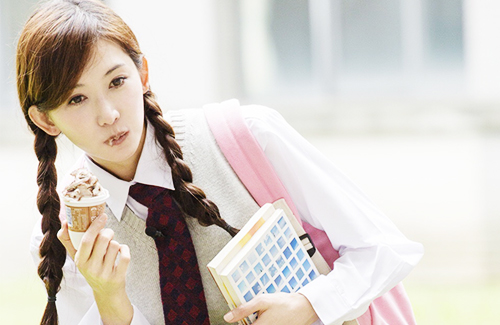 Taiwanese model and actress Lin Chi-ling (林志玲) is looking adorable in a schoolgirl outfit while shooting for the Chinese reality show, Go Fighting! <極限挑戰>. The second season of the show premiered on April 17 on Dragon TV.

Celebrity guests on the show are tasked to take on various challenges that are related to current social issues. Last week, the 41-year-old Lin Chi-ling went on Weibo to share a series of pictures that she took while filming the show. In the pictures, Chi-ling wore a schoolgirl outfit—with a knee-length plaid skirt, a wool vest, and carrying a pink backpack. She filmed the segment alongside Taiwanese artist Show Lo (羅志祥) and Chinese artist Huang Bo (黃渤), both hilariously cosplaying as schoolgirls as well.

Chi-ling’s schoolgirl look was shocking. Though she’s already past her forties, she does not look a year past thirty. Netizens were quick to leave positive messages on her post, exclaiming that Chi-ling does not look her age at all, and that she doesn’t seem to age.

But Chi-ling has her eyes set on her costar, Show Lo (Xiao Zhu). In her Weibo post, she said, “Xiao Zhu, you’re so beautiful it has to be illegal! You want to snatch Bo Ge away from me?”