Alvin Chau Has Another New Mistress? 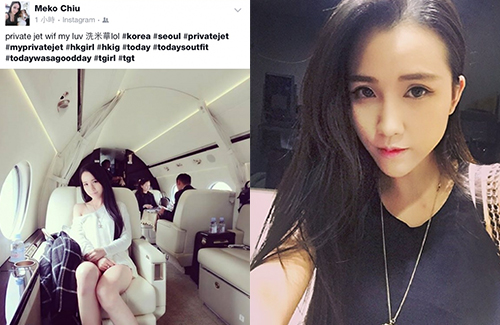 A young Hong Kong woman, known by the name Meko Chiu, recently posted a photo of herself inside a private jet heading to South Korea on Instagram and Facebook. The private jet is owned by casino tycoon Alvin Chau (周焯華). Meko captioned the photo with “private jet wif my luv Sai Mai Wah (洗米華) lol” The back of Alvin’s head can be seen in the background of the photo, chatting with his female assistant. She also shared another photo of Alvin and his team waiting to board the plane.

The photos, however, were quickly deleted by Meko after more people discovered the uploads. The woman, reported to be an up-and-coming pseudo-model known for her resemblance to Kay Tse (謝安琪), is said to be Alvin’s new mistress. They reportedly met at a night club and grew close this past September when Alvin’s wife Heidi Chan (陳慧玲) and mistress Mandy Lieu were away in Europe. Alvin and Meko spent a lot of time together in Macau.

Meko immediately closed down her Instagram page when reports of her “affair” with Alvin were published. She then posted up  a brief message on her Facebook page to clarify her relationship with Alvin, writing, “Actually, I was invited to go on this trip because of a friend. This is my first time meeting Wah Gor. He is my idol. Please do not misunderstand!”

The Hong Kong media contacted Meko, who is still in Seoul, for further clarification. Meko said, “My boyfriend is one of the VIPs for this event, so that is why I got to board his private jet.”

In regards to her message that referred to Alvin as “my love,” Meko said she was only starstruck when she saw Alvin, who she refers to as her idol. Asked if she was afraid that his wife would take offense, Meko admitted, “Yes.”

Alvin is known for his tumultuous relationships with both Heidi Chan and Mandy Lieu, both who have given birth to his daughters earlier this year. Asking if Meko has ever been a third party in a relationship, Meko stressed, “No. It was my boyfriend who suggested me to delete those pictures. I was not expecting to get such a big reaction.” Meko refused to show a picture of her boyfriend as “proof”, explaining, “Not convenient to go public.”

The news of Alvin having a possible new love interest went to Heidi Chan. When hearing the news, Heidi was silent for a while before saying “I am overseas. I will not respond to any questions.” Alvin’s spokesperson said, “Mr. Chau will not reply.” Mandy Lieu’s manager said, “We don’t know what’s going on so no comment.”

Meko released an official statement on her Facebook on November 7, once again stressing that she is not in a relationship with Alvin Chau. She said the following:

24 comments to Alvin Chau Has Another New Mistress?