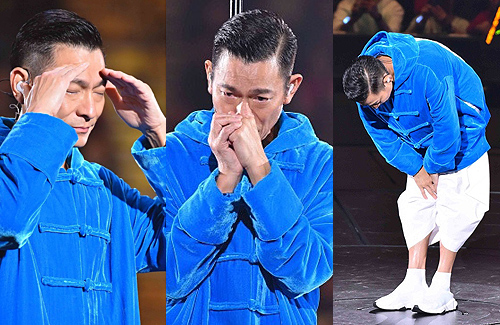 While Andy Lau (劉德華) originally scheduled to perform a series of 20 concert sessions in the Hong Kong Coliseum, the 57-year-old star was unable to continue his performance and ended his concert tour short.

During his concert on December 28, Andy told the audience that the doctor originally advised him not to sing but Andy did not listen. His voice had grown raspy. With tears in his eyes, Andy said, “I don’t want everyone to listen to my voice like this for the whole concert, but I can’t help it. I will sing one last song, ‘If One Day’ <如果有一天>, and end my concert. I will do my best to sing and I hope we can sing together. I want to apologize and thank everyone; you have to give applause to yourself!”

After Andy sang the last verse, Andy gave a deep bow to the crowd and in return, the entire audience gave Andy applause. The organizers will will refund the tickets to cancelled sessions as soon as possible. Although fans are disappointed, they want to see Andy healthy and hope that he recovers well.