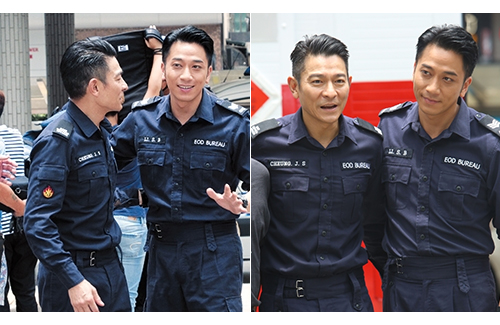 A career transition from television to film is not always easy, but a bright future appears to be ahead for Ron Ng (吳卓羲). The former TVB actor is currently starring alongside Andy Lau (劉德華) in the new action thriller flick Shock Wave <拆彈專家>, directed by Herman Yau (邱禮濤). The movie is produced by Andy and distributed by Universe Films.

Though Ron doesn’t play a big part in the film—he plays the subordinate of Andy, a professional bomb defuser—a good chunk of his screen time is with the veteran actor. As both Ron and Andy made their debuts as TVB idols, the senior and junior duo got along very well on set.

Earlier, the cast of Shock Wave was seen shooting a bomb scene at the Immigration Tower in Wan Chai. The crew blocked out several streets for the large-scale action sequence. Andy, Ron, Louis Cheung (張繼聰), and Babyjohn Choi (蔡瀚億) were spotted at the scene.

The scene was about Andy, dressed in a heavy bomb suit, attempting to defuse an explosive. The suit was heavy and hot, and it reminded Andy of the time he had to wear a body suit for Running on Karma <大隻佬>.

Andy acted as a mentor for Ron throughout filming. Andy pointed out correct standing positions, camera angles, and observed Ron earnestly when it was Ron’s camera time. Ron said, “I decided to do this movie because I know I’ll be able to learn a lot from Andy. He patiently advises juniors. However, it is also stressful for me, as he crosses his arms whenever he watches me act.”

Asking Andy why he decided to cast Ron in the movie, he laughed and said, “It’s because he is a handsome guy!”