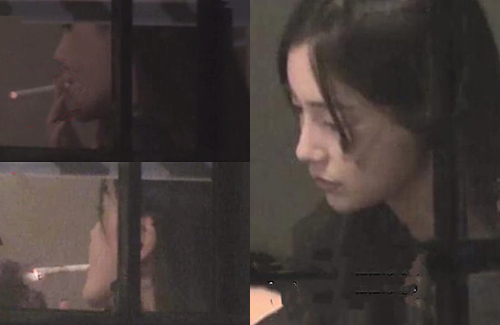 The actress was first photographed smoking in 2008, after which she promised to quit smoking. However, with many photos showing her smoking in these past 11 years, it is clear that she has failed to break out of her habits. Even though she became a mom and had fans urging her to quit for the sake of her son, the actress still continues to smoke.

Angelababy’s smoking photos are even more embarrassing because her husband, Huang Xiaoming (黃曉明), participated in an anti-smoking campaign event earlier. He even posted a short video to encourage people to quit smoking for their health. In the video, he said, “I’m participating in the tobacco control action campaign. For a healthy China, I love you.”

Although Xiaoming once stated that he does not mind Angelababy for being a smoker, it is inevitable that his recent anti-smoking campaign would be ridiculed. Netizens could criticize him for being incapable of helping his wife to quit, let alone have the influence to encourage others to stop smoking.

Angelababy Smokes With an Injured Finger