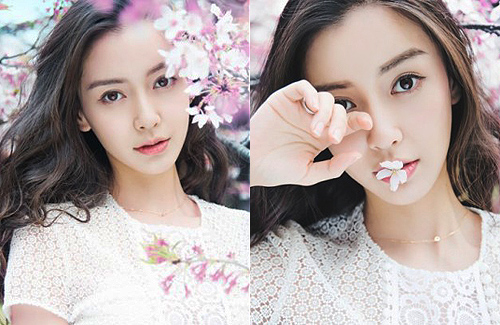 Since their wedding last October, power couple Huang Xiaoming (黄晓明) and Angelababy (楊穎) have been busy with their careers respectively. Aside from filming variety show Running Man <奔跑吧兄弟>, Angelababy will be releasing a new photo book this year.

It has been six years since Angelababy’s last photo book release, which propelled her to stardom. Recently leaked photos confirm that the 27-year-old will be releasing a new photo book this year, titled Story of Cherry Blossoms <櫻花說>. The backdrop of the cherry blossoms highlight Angelababy’s porcelain skin and luminescent eyes. Angelababy appears youthful and fresh-looking in the photos.

Donning various outfits, including a schoolgirl top with shorts and a knee-length white knit dress, Angelababy is seemingly straying away from her usual sexy and sensual appeal. Perhaps due to her new status as Huang Xiaoming’s wife, the photos instead accentuated her classiness and femininity.