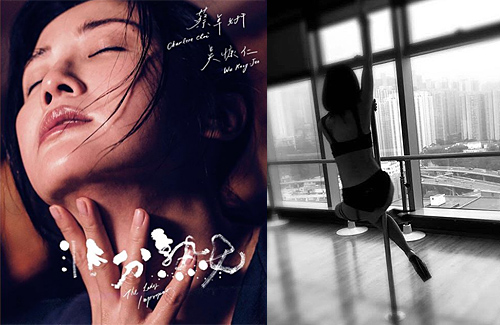 Hoping to make a breakthrough in the film industry, Charlene Choi (蔡卓妍) took on a provocative role in The Lady Improper <非分熟女>. The film is directed by Jessey Tsang (曾翠珊), the winner of the New Director Award at the Hong Kong Film Awards.

Slated to hit theaters in 2019, a one-minute trailer was released yesterday. In a bathtub by herself, Charlene bared her back while washing herself. The clip was shown with Charlene’s monologue, “Although I’ve been married to my husband for four years, I’m still a virgin.”

The story revolves around Charlene’s character, who lives a repetitive life without goals and eventually suppresses her own self after marriage, not knowing what she wants in life anymore. Hoping to leave her boring life behind and finally live freely outside the box, The Lady Improper explores the themes of coming to terms with one’s true identity and releasing the lively spirit inside each person.

Besides the bathtub scene in the short trailer, Charlene started practicing pole-dancing in May for her role. Attempting a rather bold and risqué character, Charlene’s efforts have been met with positive media buzz so far, with many fans anticipating the movie’s release.