Edison Chen (陳冠希) became one of the most despicable stars in Chinese media after his nude photo scandal in 2008. Dating many women in the past, he finally settled down with model Shupei Qin (秦舒培) after welcoming their daughter last year. At 38, Edison shows signs of wrinkles and recently admitted to feeling old. Accepting an interview with GQ, Edison talked about  fatherhood and the importance of his daughter, Alaia

Starting to feel the age, he sighed, “After having Alaia, I suddenly feel so old. Sometimes I feel like I’m a 55-year-old uncle.”

Recalling the moment he received the news that Shupei was pregnant, Edison revealed that the couple was in the midst of renovating their home and getting ready for a vacation. Although having a child was not part of the original plan, Edison said Shupei’s opinion on whether or not they should keep the baby was more important than his. When the model said she wanted the baby, Edison wholeheartedly agreed and even told her to eat more as she was pregnant.

To Be a Different Kind of Father

Now with a child of his own, Edison said he wants to be there for Alaia rather than just giving her monetary things. When Edison was a child, his father left Canada and moved to Hong Kong for work so he did not have too much time for family and would often just give him money instead. 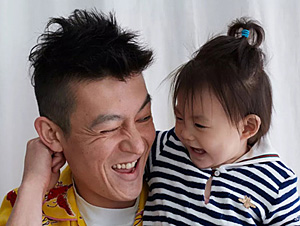 In the first three months after Alaia was born, Edison and Shupei halted their work in order to spend every single day with their daughter. As a first time father, he also bought a lot of books related to newborn babies and childcare during Shupei’s pregnancy.

While children are growing up in a world full of technology and smart gadgets, Edison said he will not let Alaia become constantly obsessed with iPads and mobile phones. Hoping their daughter can be a more worldly person when she grows up, Edison and Shupei wants Alaia to take ballet in a few years.

While he is currently working hard to earn money, Edison hopes he can slow down and become a bigger part of Alaia’s life when she is older. By the time she goes to school, Edison said he will be in charge of picking her up and dropping her off at school, as well as making dinner at home.

A Simple Man at Heart

From the beginning of his career, Edison developed a rather aloof playboy image, but things seemed to have taken an 180-degree turn since settling down with his new family. Stating that he is a rather simple man, Edison said he does not care too much for his external image anymore. Recalling a time when he said he did not want to put on makeup for an event, Edison became rather angry when his picture turned out extremely photoshopped. Exclaiming that there was nothing wrong with aging, Edison said he will not take anymore photoshoots with the company if this happens again.

With Alaia only one year old, Edison and Shupei want her to enjoy her childhood as much as she can. Besides throwing her an lavish birthday party for her first birthday, the couple took their daughter to Hawaii for the first time.

Understanding that Alaia will grow up very quickly and have a boyfriend of her own in the future, Edison said he will not be a harsh and disapproving father. Instead, he would find the best traits in the future boyfriend and get to know him through sports such as basketball.

Looking far down the future, Edison expressed that the roles can be reversed when he becomes an old man. He may be currently changing Alaia’s diapers right now, but when the time comes, Edison said he hopes Alaia will be able to do the same for him.